BY hellodrdavis on February 27, 2020 | Comments: 2 comments
Related : Soap Opera, Spoiler, Television, The Bold and the Beautiful 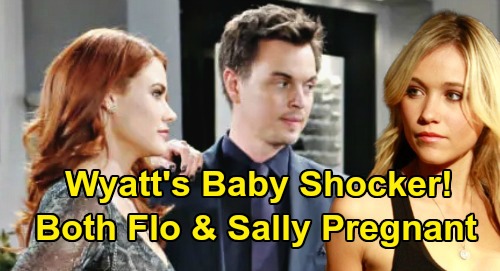 The Bold and the Beautiful (B&B) spoilers tease that Wyatt Spencer (Darin Brooks) has a big task in front of him. As B&B viewers know, he and Flo Fulton (Katrina Bowden) have decided to put their romance on hold for the time being while Wyatt gets back together with Sally Spectra (Courtney Hope). Sally’s living on borrowed time and she’s got just a month left to live, so Wyatt and Flo made the ultimate sacrifice and parted ways for now.

That will allow Wyatt to care for Sally in her time of need. Of course, the situation is a bit tricky since Sally doesn’t realize that both Wyatt and Flo know about her terminal illness.

Wyatt is leading Sally to believe that he wants to get back together with her not knowing about her condition, and he’s hoping that Sally will eventually feel comfortable enough to tell him about her illness on her own.

Well, according to B&B spoilers, Wyatt will soon tell Sally that he loves her, and that he wants her to move in with him. It looks like they’ll be moving forward as a couple again, and we can only assume that will mean they’ll share the same bed.

Wyatt will be acting like their relationship is back on, so there’s a good chance that they’ll end up sleeping together.

We should note that there’s been no indication that Courtney Hope, who portrays Sally, will be leaving the show, so there’s probably a good chance that Sally could actually beat this thing with a miracle cure.

After all, she hasn’t yet looked into specialists or alternate treatment options, and it would be a very soapy twist if she were somehow able to fight the battle against her mystery illness and win.

Of course, if that happens, then that will put Wyatt in a big relationship bind. Of course, he’d be thrilled that Sally was going to live, and that would be the most important thing.

But Wyatt will also suddenly be stuck in a relationship with Sally when he really wants Flo. It would be a real mess, and Wyatt would have to eventually fess up to Sally about how he reunited with her because of her illness.

But what if there were another big twist to the story? Assuming that Wyatt and Sally sleep together during their reunion, there’s the very real possibility that Sally could end up pregnant. Imagine Wyatt winding up in Liam Spencer’s (Scott Clifton) baby situation!

And considering that Wyatt has spent quite a bit of time with Flo recently, there’s also the chance that she could become pregnant as well. Could B&B be setting up a dual-pregnancy storyline here?

It would sure make for some good drama if Wyatt ended up being a father to both Sally’s and Flo’s babies, all precipitated by this compassionate gesture that Flo and Wyatt concocted to help Sally out during the worst time of her life.

It would put Wyatt in a very “Liam” position, with two babies by two different women. It could also set up a very real love triangle between Wyatt, Sally, and Flo down the road.

We’ll see what happens here, but it seems like things could be aligning for a dual pregnancy storyline here. What do you think? Will we see both Flo and Sally become pregnant out of this situation? Keep on watching B&B and don’t forget to check back with CDL for the latest Bold and the Beautiful spoilers, recaps, and news.