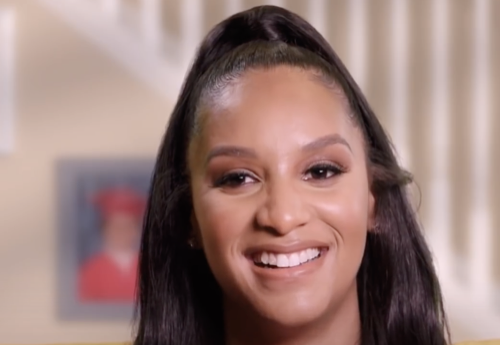 Tonight on TLC their reality show The Family Chantel premieres with an all-new Monday, October 19, 2020, episode and have your The Family Chantel recap below.  On tonight’s The Family Chantel season 2 episode 2 “A New Family Feud,” as per the TLC synopsis, “Chantel’s suspicions about Royal’s relationship with Angenette grow after talking to Winter and River; as Pedro plans a trip to NYC, Chantel gets big news about her graduation; and sibling secrets come out when tempers flare during a holiday photoshoot.”

Royal crossed a line with his sister Chantel. Chantel was happy that her big brother Royal came back to town after years away and with his foreign-born wife Angenette by his side. Angenette doesn’t know Royal’s family that well. She’s never really spent time with any of them and so Chantel invited her sister-in-law out on the town. Chantel wanted to get to know her. It was her, Winter, Agenette, and several of Chantel’s friends. It wasn’t Winter’s scene and still she wants because she too wanted to get to know her sister-in-law. They were all talking and they were enjoying themselves when Royal appeared. Royal had been texting his wife the whole night. He became concerned when she never answered him back and so he tracked her down.

Royal tracked Agenette back to the club. He came and he told her they were leaving. Royal didn’t think his sister Chantel was a good influence on his wife. He didn’t think Chantel was a good woman because she danced for other men to see and so he warned Agenette against spending even more time with her sister-in-law. He didn’t say anything about his other sister Winter. It was just Chantel he was concerned about and so he and Agenette left the club together. His sister Chantel tried to get him to calm down. She told him that he was interrupting their night and he didn’t listen to her because again he thought her morals were loose.

Chantel was still upset about what happened a few days later. She and Winter both agree that Royal went too far by tracking them back to the club. They also thought Royal did that because he doesn’t quite trust his wife. They believe that something happened between Royal and Agenette that made Royal so possessive. The only thing Chantel could think of was something her brother mentioned to her at the beginning of his relationship and it was that he found out Agenette had been speaking to other Americans. Like she was shopping around for the right American to date and/or marry. Agenette also was the first to reach out to Royal and so that again her movements suspicious.

Chantel and Winter believe there’s something going on with Agenette. They don’t quite trust her and they also don’t want to say anything to their parents because their parents have been pretty good at welcoming Agenette into the family. They actually get along with Agenette. They also wanted to visit her family later on and so they were acting much better with Agenette than they had with Pedro. Pedro wasn’t American. He and Chantel met through a mutual friend and their relationship developed from there. Chantel had been nervous about her parents’ reaction to her then-fiancé. She created a lie as their backstory because she thought that would make her family like him more and all it did was work against them.

Her family mistrusts Pedro. They didn’t want Chantel to marry him and they’ve resented his presence ever since the marriage did occur. Pedro has more or less gotten used to their attitude. He doesn’t like it. He complains about it to his own family and so that’s why his family doesn’t like Chantel or her family. His sister Nicole is especially horrible to Chantel. She’s always putting down Chantel and Chantel doesn’t even have to be in the room for Nicole to insult her. Therefore, it was only fair that Nicole now faces opposition with the man she’s dating. She’s dating an American named Alejandro. He’s a manager at a cell phone store and he’s also lighter than she usually dates.

Nicole showed a picture of him to her friends. Her friends all had horrible things to say about him because they said he was almost white and they also complained about how he was part of the lower classes with his job. They expected Nicole to marry a businessman. They thought she was lowering her standards and they weren’t the only ones worried. Nicole’s mother Lydia was also concerned and so she asked Pedro to go check this Alejandro out. Pedro agreed to do it. He told his wife that they could go to New York as part of her graduation present and he only later admitted his real reason for wanting to go to New York.

Chantel was mad about it at first. She came around to the idea in the end because she wanted to support Pedro and so Chantel made a mistake when she told her mom about this trip. Her mom said what she said when she first heard. Karen said that this trip wasn’t about Chantel. It was her graduation present and it was about someone else. It wasn’t fair. Karen thought Chantel deserved better and so Chantel brought up Agenette. She said she doesn’t trust Agenette and she doesn’t understand why her mother does. Karen then tried to claim that she got a good read of Agenette. Agenette seemed like a good person and she wasn’t on the website for scammers like Pedro was.

Karen managed to bring things back to Pedro. She claimed Pedro couldn’t be trusted and so her conversation with Chantel turned into another argument against Chantel’s husband. Chantel also later received some bad news. She found out she passed her classes and that she was a few points shy from graduating. She needed to redo a semester. This means she can’t graduate with her friends and it also means that Pedro’s own schooling has to be pushed back. He planned on going back to school once Chantel was finished. Chantel had even gone to a job interview at a practice where she really wants to work in. And so this non-graduating thing has pushed things further back than they had planned.

Pedro still did his driving lessons. It hadn’t gone great because there’s still more for him to learn before he’s ready and so he was getting better. Pedro was called by his sister while he was practicing. He called her back and it turns out Nicole might not be able to make the New York. If that’s the case, she doesn’t want the trip to go ahead without her. Nicole was worried that Chantel would badmouth her. She thinks if she’s there that she can defend herself and so the trip is up in the air. It’s not like Chantel graduated anyways. There was also Chantel’s family. Chantel’s family was wanting to do a Christmas photo shoot and it was going to be awkward because Royal hadn’t liked all the questions Pedro had been asking him.

There was also the fact that Winter no longer celebrates Christmas. She thinks it’s too commercialize and so she refuses to wear the Christmas sweater for the photoshoot. Chantel called out Winter for her attitude. She also brought up Jah because she thinks Winter has been forever changed because of her relationship with Jah and so she got into a huge fight with her sister about it. And her sister stormed away cursing her out.