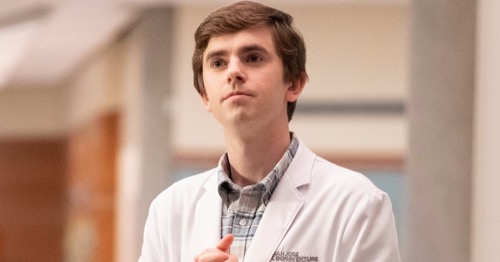 Tonight on NBC their new medical drama “The Good Doctor” airs with an all-new Monday, February 24, 2020, episode and we have your The Good Doctor recap below. On tonight’s The Good Doctor season 3 episode 16 called, “Autopsy” as per the ABC synopsis, “When Dr. Shaun Murphy makes an emotional confession, the result may not be as desired.

Meanwhile, he becomes obsessed with performing an autopsy on a Jane Doe, which challenges his relationships at the hospital; and Dr. Claire Browne, Dr. Morgan Reznick, and Dr. Marcus Andrews treat a male college student with a mysterious split personality disorder.”

Aaron talks to Shaun, he invites him over to dinner. Shaun tells Aaron that he is back with Lea, Aaron is not happy about it.

Neil, Claire, and Shuan are with a patient, Alice, she can’t take two steps without falling down. Dizziness, lightheadedness; started five years ago after the birth of her daughter. This is the seventeenth time she has seen a doctor, nobody can figure out what she has. She hands Shaun a tape of all her medical tests, five years of her medical odyssey.

Claire is walking to the elevator and she sees Dash.

Alex is with another patient, Wes, who has an infection, he needs to stay on a longer course of antibiotics. The patient deals with at-risk youth, and they are all at the doorway looking into him. All of a sudden a monitor goes off, Alex tells him he has to go into emergency surgery the infection has spread to his aorta valve. The boys in the doorway looking very worried.

Shaun has written all the patient’s symptoms down, he, Claire and Neil are trying to figure out what Alice has. Shaun thinks he has figured it out, Neil gives him the go-ahead to test for it. Shaun asks Claire to do the test, he has a time-sensitive issue to deal with.

Shaun is at home, he called Lea there. He shoes her that rearranged things in the house to make her happy and tells her he can learn to accept things that he is not comfortable with. He can deal with her neediness, selfishness. She tells him that he didn’t have to call her from work, to show him this. He says she is right and goes back to the hospital.

Wes is in surgery, he is going to have permanent heart damage. Dr. Lim enters the operating room and tells Alex that he needs to go with her. She says security has said they can keep this between this, the cops don’t have to be called. His son is the boardroom, he was caught vaping pot. Alex reminds his son that he has asthma and knows he is not that stupid.

Alice is in distress, Shaun is upset, he thinks his diagnose is wrong. Claire tells him to snap out of it, or she is going to die. Just then her daughter and husband walk in the room.

Wes is awake, there was significant tissue damage from the infection but it should be manageable with medication and modifying his diet. He needs a long time followup with a Cardiologist. Dr. Lim comes in with one of the boys, he was also caught vaping with Alex’s son. Dr. Lim checks Wes’s feet, they are swollen; they need to do additional tests.

Alice is awake, her husband wants her to go home. She lied to her husband, she told him that she was visiting her sister. He goes on to say she has a diagnosis and it was confirmed by two other doctors. She left it out of her medical records. He tells her that she is a good mother, it is good in the life they have, and missing it by searching for what might not exist. Shaun tells Alice she may have an adrenal tumor and it is good news, it can be removed.

Alex is with his son, he asks him what is going on. All of a sudden, his son starts hyperventilating, he is having a panic attack. He says it happens a lot, and vaping makes the feeling go away.

In Wes’ room, the boys are asked to leave so he can be given results. The infection in his heart stopped blood flow to his kidneys and they were already weak. He has progressed to complete renal failure, he needs a transplant. Claire tells him a family member would be best for transplant, he says given his years of addiction, his Christmas list is short.

Claire and Shaun take an MRI on Alice and get a new diagnosis. Alice is advised that she has to have her adrenal glands removed, and she would need to be on steroid replacement therapy for the rest of her life. Alice is thrilled. Claire tells her that the condition is not life-threatening. Her husband tells her that he loves her, but if she insists on doing this, he is leaving with their daughter. Shaun tells him that if he loves her, he shouldn’t leave her, it is not her fault that she is sick. The doctors leave the room, Alice gives in to her husband, she tells him she won’t have the surgery, she can’t lose he and Ruby.

Claire tells Marcus and Alex that Wes suffered major cardiac damage. He is stable, but his heart is having a hard time with dialysis. Marcus tells Alex to try and get him moved up the list for a donor, and also call family members.

Claire is looking at a box, it is filled with recipes from Dash’s wife who passed away. She tells Neil that he asked her on a date. She tells him that Shaun is right, coming home to an empty apartment really sucks. Neil tells her that she deserves to be happy.

Alex tells his son, he talked to his mom and they have found him, someone, to talk to about the anxiety. His son tells him that he always says he is ok because he is too busy to listen to him.

Shaun starts talking about his love life, Claire tells him to find someone who makes him happy and a better version of himself.

Alice is leaving the hospital with her husband and daughter. Shaun tells Alice that she doesn’t need to go home, they have a safe and viable option, they won’t have to remove her adrenal glands.

The boys go to see Claire and ask her if Wes is dying, she tells them to speak to them. One of the boys, Max, tells her they were tested, one is match and he is going to give Wes his kidney. The hospital is against it, they don’t want him to risk his life, it is hard recovery to give your kidney. Max says he is a screw-up, but Wes isn’t. He has done everything for him, if he is not a lost cause, it is because Wes never gave up on him. Once Max leaves, the doctors talk about it. Dr. Lim doesn’t want to approve it.

Dr. Lim goes to see Wes and tells him that Max is a match and wants to give him his kidney. But, she won’t approve of it. Wes says it is ok, it is his job to save those kids, not the other way around. Dr. Lim then goes to see Alex, he is in the chapel. She tells him that his kidney is not a match. Max says it figures, he can’t do one thing right. He starts crying, Dr. Lim puts her arm around him and consoles him.

Alice is in surgery, all is going well. After surgery, Alice reports that she is doing very well. She gets out of bed, walks around, the room is not spinning. She picks up her daughter and hugs her.

Claire made dinner for Dash, she burned it. They both taste it, she says it is worse than it looks.

Shaun meets Lea outside her work, he says they should go on a date, a real date. He asks her to let him try to fix this. He has a plan to fix this. She tells him that he is autistic, he can’t fix that. He is who he is, she is who she is, and the two of them will never work. Shaun walks away.