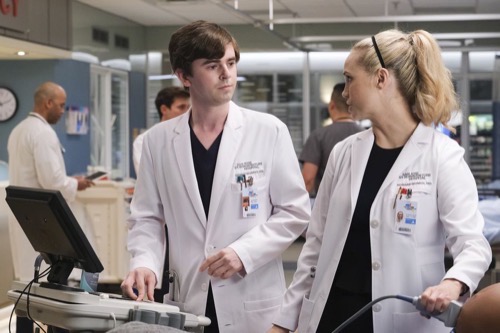 Tonight on NBC their new medical drama “The Good Doctor” airs with an all-new Monday, November 23, 2020, episode and we have your The Good Doctor recap below. On tonight’s The Good Doctor season 4 episode, 4 called, “Not The Same” as per the ABC synopsis, “Dr. Morgan Reznik and Dr. Shaun Murphy’s pregnant patient with twins is having pain and they are forced to grapple with a decision no one wants to make. Meanwhile, Shaun asks Lea to move back in despite her reservations.”

Shaun and Lea are doing yoga together, he tells her that she shouldn’t come over anymore, she should move in. She says living together means a bigger commitment and more trust, and she doesn’t think they are there yet. Shaun gives her his banking password, then leaves the room.

Claire and Audrey and sharing the evening together, Claire gets a text from Morgan, she needs her to go in as soon as possible. Morgan goes in and treats a patient that has ingrown hard that has become an abscess and requires a surgeon. The applicants are there, Claire tells them to give the patient the VIP treatment.

Shaun and Morgan are treating a patient who is pregnant with twins, her blood pressure is soaring and Shaun tells her that they need to get it done as soon as possible. The fetal heart rate is falling in one of the babies. She asks if her body is trying to kill one of her babies, Shaun says yes.

Enrique is speaking to Asher about their families. Asher picks up a paper, he tells Enrique that Billy has cancer.

Shaun is talking to Marcus, he tells him that Jordan talks too much, Olivia talks too little, and doesn’t know where the jugular vein is. Marcus asks if he has seen Olivia’s resume, it is not a lack of knowledge, he tells Shaun to push her. Marcus thinks Olivia doesn’t like to be in the spotlight.

Shaun is working with Olivia, she does well.

Claire tells the patient with ingrown hair that he has melanoma, Morgan says the good news is that they can get rid of all of it right away. Alex walks in, Billy is talking about his wife, he tells them she passed away but he got his good attitude from her.

Olivia is in surgery, with Marcus and Shaun; she makes a mistake with one of the instruments, Marcus blames Shaun because he is the senior.
Shaun goes to see Aaron and tells him that he was blamed, Shaun tells him that he needs to help Olivia more.

Billy is in surgery, he goes in distress – the save him, but cancer has spread to his liver.

Shaun finds Lea doing yoga at work, he tells her she can’t do it at work. She talks again about moving in, she says once their feelings change, everything changes. He says he still feels the same about her, happy.

Shaun speaks to Olivia, she opens up, she says she has always been afraid of firsts, all the faces looking at her, waiting for her to screw up.

The pregnant woman is having problems, one of the amniotic sacs ruptured. The team discusses the possibility of doing a c-section, sadly one baby may not make it. Shaun says neither baby has to die. He wants to start labor, deliver the stronger baby, then stop it, and allow the weaker baby to thrive.

Shaun and Morgan go to see the pregnant woman and give her the options. Jordan asks the mother if she has named the babies yet, she has. She tells Morgan that she has to save both of them.

Billy is back in surgery. Olivia goes to see Olivia, they hug each other – they obviously know each other – actually he says she is her niece. She tells him that Shaun is very supportive.

Lea goes to see Shaun, she tells him that one of the reasons she is in the relationship is because he is different and can’t see herself with anyone else. She says she is moving in with him. He asks her if that means they have enough commitment and trust, she says she is not sure. He asks her if she is doing it because it is inevitable, she says yes. Shaun is thrilled.

Morgan tells Shaun that he has a problem with Jordan and needs to rein her in, just liked he fixed Olivia.

Alex is about the hospital, Morgan asks him what is wrong, he says he is finalizing his divorce. He knows it was over for years, but now it is final and it hurts. She offers for him to stay in her place, it is cheaper than a motel, he says thanks but he is good.

The woman is in labor, one of the babies are about to be born. Shaun asks Jordan how she feels and why she has a problem with authority. She tells him that if she is going to screw up she needs to know that he has her back.

Bill is awake, Claire tells him that he has an infection and it could spread. He tells her that he understands that he might die, but he has had worse days. He says the day after his wife died, he almost killed himself. But on the way to get a gun, he helped some kids who had a flat tire. Then he told them there was a sale on tires at Costco and he heard his wife laugh. That stopped him from killing himself.

One baby is born, he is underdeveloped and put on a ventilator. Now, he has to stop the labor. The medicine is not working, she is still in labor. Shaun tells her that they need to do a c-section, or both of them will die. Jordan tries to calm her down because she is getting very upset, she thinks her baby will die if she has a c-section. Contractions are stopping, they don’t need to operate.

Shaun meets with Aaron, he says he can’t teach. Aaron tells him that he is a wonderful teacher, he has been learning to form him since the first day they met.

Claire and Alex are in Billy’s room, he wakes up and looks good. Claire thanks her applicants for helping save a life.

Jordan and Olivia bring in the woman’s baby, she is still pregnant with the other baby.

Morgan is home eating dinner and watching tv when there is a knock on the door, it is Alex with his suitcase.

Olivia is outside sitting on a bench, he asks her if she wants a ride. He tells her that he wants to be there for her. She says accepting his help makes him feel like garbage. She tells him that she loves him but she needs to make this work. Marcus gets up and walks away.

Lea is unpacking her things, Shaun has made dinner for the two. They both say it feels like home again. Shaun says its not the same as before its better.