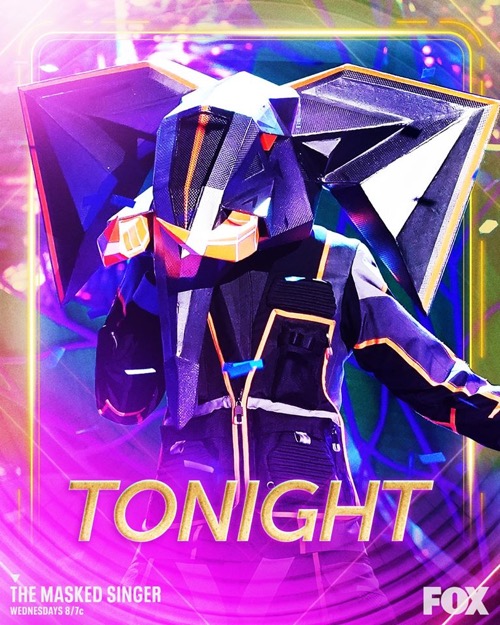 Tonight on FOX The Masked Singer airs with an all-new Wednesday, February 19, 2019, Season 3 Episode 4 and we have your The Masked Singer recap below. On tonight’s The Masked Singer season, 3 episodes 4 called “A Brand New Six Pack: Group B Kickoff!,” as per the FOX synopsis, “An all-new batch of six celebrities are introduced and take the stage for their first performances of the season.”

Tonight’s episode of the Masked Singer has six new characters to gander at and make guesses about and they are Banana, Frog, Kitty, Taco, Elephant, and Mouse. The judges are of course Robin Thicke, Jenny McCarthy, Ken Jeong, and Nicole Scherzinger.

Frog is up first. Clues: he talks about a lightning bolt and how he had to jump. There is a poster for the 1000-meter at the 1996 Olympics, a microphone and $106 split into three bills. Frog does can’t touch this by M.C Hammer…. and I absolutely love it!!!!!! My guess Carl Lewis!

Next is the Elephant he says in his clue package that he started on benches and ended up in white houses. He is playing the drums and there are two blue jays on a table. Elephant sings Friday I’m In Love by the Cure. My guess Tony Hawk.

Kitty hits the stage next. The eyes on the costume are two different colors (maybe a clue…maybe not). She says she feels at home in the weird and wonderful and feels like the show was made for her. She wants to wipe the slate clean. Pirates and rose are in the clue package. Kitty sings Dangerous Woman by Ariana Grande. My guess Julianne Hough.

Taco is up he says he has been a comforting part of your life for decades. San Francisco trolly in the clue package. Taco sings fly me to the moon by Frank Sinatra. My guess (didn’t even need the clue package ) 100% Tom Bergeron.

Tyson Fury and Dontay Wilder show up to remind us that we have a huge pay- per -view match on Saturday.

Mouse is in the house (couldn’t resist)…. Mouses clue package lets us know that her presence is larger than life and she has always been a leader in her field. Whiteboard in the back says “bang bang formation”. 1979 on the football player uniforms. She never accepts anything less than gold. Mouse sings Get Here by Oleta Adams. My guess( from the voice alone) Dionne Warwick.

Last but not least is the Banana. Banana has a cowboy hat and a blowfish at the beginning of his package. Talks about overdoing it and it not being his first rodeo. He says he is a hoot. There is a blue-collar (get it?). He just wants to see you smile. Banana sings A little Less Conversation by Elvis Presley. My guess (blue-collar gives it away) Bill Engvall.

Now we get to find out which one is going to be unmasked….and …it’s the….Elephant. The Elephant is….. Tony Hawk (told ya) :)