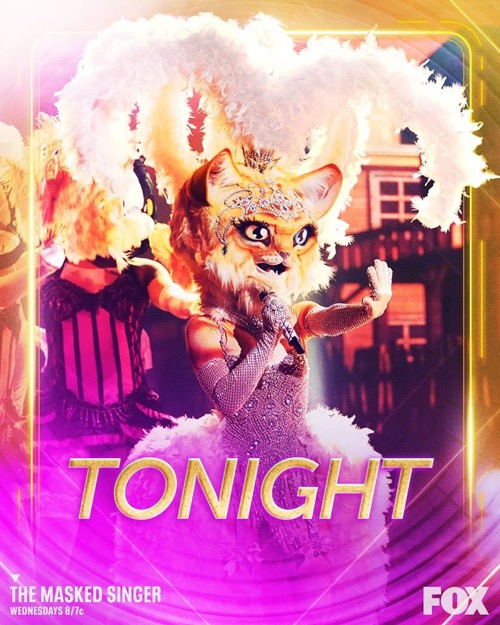 Tonight on FOX The Masked Singer airs with an all-new Wednesday, March 4, 2019, Season 3 Episode 6 and we have your The Masked Singer recap below. On tonight’s The Masked Singer season, 3 episodes 6 called “Friends In High Places: Group B Championships,” as per the FOX synopsis, “Season One winner T-Pain (“Monster”) returns to the show as “Group B” competes for a spot in the “Super Nine.”

Host Nick Cannon and panelists Ken Jeong, Jenny McCarthy, Nicole Scherzinger and Robin Thicke dive into the clues and make their guesses for the celebrity singers performing under their masks.”

Tonight’s episode of the Masked Singer has a special guest judge to join Robin, Jenny, Ken, and Nicole. It’s season one winner T-Pain. The contestants sing “Larger than Life” by the Backstreet Boys to kick off the show. It’s actually really good.

Kitty is up this week’s clue packages are being given by their friends. Kitty’s friend has long green hair and says they’ve known each other since they were little kittens. She didn’t have a ton of friends and got bullied at school for being weird. Kitty enjoyed writing poems and directing horror films for her friends to star in. She once got in trouble for scaring a girl in a class by telling her that she could see the ghost. Kitty’s friend says she may have the voice of an angel, but it’s her dark side that will help her slay her competition. Kitty sings “Mama’s Broken Heart” by Miranda Lambert. Kitty gives a friendship bracelet to Robin that says “Fireworks”. Kitty says the first time they met was lit. My guess Victoria Justice. T-Pain thinks it’s Christina Ricci. Ken thinks it’s Kristen Bell. Jenny thinks it’s Haley Duff.

Taco hits the stage next. There is a menu in his clue package with the letters “ME”. Taco’s friend who happens to be hidden by a seafood platter says he helps people when they’re knocked down. He always finds laughter in everything. Taco has kids. Taco sings “Can’t Help Myself” by The Four Tops. Taco gives a friendship bracelet to Nicole that says “kiss”. Taco says it’s because when he saw her in person she was “perfect.” My guess Tom Bergeron. Nicole thinks it’s Barry Manilow. Robin thinks it’s Howie Mandel. Jenny thinks it’s Jerry Springer. Taco says you shouldn’t trust first impressions. That everyone wears a mask and that we should be kinder and nicer to people.

It’s Banana time. Female family members are giving his clues. They say he is a great role model and taught them how to drive Go-Carts and built them a racetrack in their backyard. They also say even though he has had some heartburn in his life he has always been a positive influence to them. They say he called and told them he was going to be on the Masked Singer. Banana sings “Lean On Me” by Bill Withers. Banana says he picked that song because his father recently passed away and that was his jam. Banana gives a friendship bracelet to Jenny that says “Nineties Love”. Banana says it’s because they had a chance to hang out as friends and that he loves her and he had a great time. My guess Bill Engvall. Jenny picks Michael Andretti. Nicole picks Brad Paisley. Ken picks Larry the Cable Guy. T-Pain picks Johnny Knoxville.

Frog is last to perform tonight. His friend an invisible woman dressed in a fur coat says she has known Frog since he was a tadpole. She says she knew instantly that he would be a superstar. The frog was in LA when she took him on his first late-night talk show. She says it was way past his bedtime but she let it slide. She said his life hasn’t always been easy but he persevered and pathed the way for so many people. She says he can stay up past eleven. We see some shampoo and a little green bow tie. Frog sings “You Dropped a Bomb on Me” by the Gap Band. Frog gives a friendship bracelet to T-Pain that says “All We Do Is Win.” My guess Bow Wow. T-Pain guesses Ludacris. Ken guesses Tommy Davidson. Robin guesses Omarion.