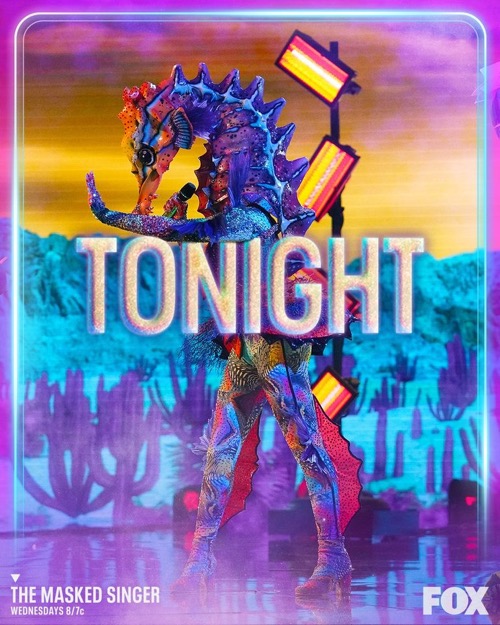 Tonight on FOX The Masked Singer airs with an all-new Wednesday, September 30, 2020, Season 4 Episode 2 and we have your The Masked Singer recap below. On tonight’s The Masked Singer season, 4 episodes 2 called “The Group B Premiere – Six More Masks,” as per the FOX synopsis, “The all-new celebrity contestants in Group B are introduced. A brand-new masked bunch of celebrity singers wearing all-new custom made costumes perform as America tries to guess who they are.”

The anticipation for last week’s “Masked Singer” premiere was astronomical, but Group A did not disappoint, and it all came to a fiery end when Dragon was the first to be unmasked for season four. The dragon was revealed to be Busta Rhymes. His unveiling blew everyone and the season was just getting started. Group B was the group with the cooky characters. There was Crocodile, Seahorse, the Serpent, Watchmacallit, Gremlin, and Baby Alien. Up first was Crocodile who revealed his clues in his package. He showcased an Italian flag and there weren’t hints of Las Vegas. Crocodile remains a mystery for now and the only thing anyone knows for sure about him, other than him being a man, is that he’s actually a good singer.

Crocodile sang “Its My Life” by Jon Bon Jovi. He truly had the chops for this popular rock song and the performance was good. The judges loved everything about his performance. From the pimp walk when he first came out to the choreography he displayed during the song. Crocodile gave off boy band vibes and so two of the judges were sure he was a former member of a boy band. Nicole thought Crocodile was Nick Lachey. Lachey went through a very public breakup and Crocodile did reveal he’s been through things in the public eye. There was also the choreography. Robin believed the Crocodile was Donnie Wahlberg. He thought secretly Jenny knew and so he tried to ask her about it.

Ken was the only one who was thinking outside of the boy band bubble. He thinks the Crocodile is secretly Jon Hamm because there was a pineapple in his package and ham goes well with pineapple on pizza. Ken’s basis was really created just on the pineapple. But the clues did get better. Baby Alien went next and he’s also a man. He revealed in his package that he was on stage at Tony’s meaning he was on Broadway. He also talked about taking control of his life and there was a quick glimpse of the Liberty Bell. The Baby Alien chose the song “Faith” by George Michaels. He sang the song without an accident and afterward he spoke with an accent. No one could tell if the accent was real or not.

The judges made their guesses. Jenny believed the Baby Alien to be Ralph Macchio because of the way the character had eighties’ themes in their package and this time the other judges weren’t half as close in thinking the same. Ken believed the Baby Alien to be Freddie Prince Jr. because he saw a stake in the package. The stake could be an indicator for “Buffy the Vampire Slayer” and that actress who played her was also Freddie’s wife. Then there was Nicole. Nicole recognized the words in the package as belonging to the “Friends”’ theme song and so she came to believe the Baby Alien was once on friends. At first, she thought it was Matt, and then she changed her mind to David Schwimmer because he does have a playhouse.

Next up was the Seahorse. Seahorse is a woman and her clues were a little bit of everything. She showcased a southern accent. She also had a western horse farm in her package video and so there reason to believe she was either from the country or occasionally dabbled in the country. There’s also plenty of evidence that she’s talented. She took on the song “Only Girl in the World” by Rihanna and her voice took everyone by surprise. Her voice was so good that everyone just assumed she was a singer in the real world. They all made their guesses based on this idea and Robin was first to make his guess. He believed the Seahorse to be Bebe Rexha because she has actually sung country songs.

Jenny assumed the Seahorse to be Halsey. She felt Halsey vibe as the Seahorse was performing and so again she chose another singer. Nicole chose a singer as well. She believes the Seahorse to be Hailee Steinfeld because Hailee was nominated for an Oscar for a country western film. So, the clues led everyone down different paths of the same street. They all thought the Seahorse was a singer and they truly stumped when it came to the Whatchamacallit. The Whatchamacallit was the character’s name and it looked like an alien with one eyeball. It also had the wordiest package out of everyone. There was a little bit of this with orange slices and a little bit of Black Panther was in there. The package led Ken to believe the unknown creature was Dame Lillard.

The package also led Robin to believe the Whatchamacallit was Tyler the Creator. The character performed the song “I Wish” by Skeel-o and it was a good performance. The Whatchamacallit chose an easier song. It wasn’t one that anyone struggled with performing and so maybe they weren’t really typical performers themselves. The clues really were everywhere with this one. It was easier with the Serpent. The Serpent talked about going down the wrong path and how it was his father who straightened him out. His father was Senior Serpent. Thereby meaning he could be a junior and he also talked about helping people. He said he wanted to lend a hand to those that were now in trouble.

The biggest clue that the Serpent gave was his voice. He had hands-down the best voice of the night and he showed that when he performed the song “I Gonna Be (Five Hundred Miles)” by the Proclaimers. His voice was so great that Jenny believes he’s John Legend. His voice and something in the package also gave off “Hamilton” vibes because both Ken and Nicole thought he was in “Hamilton”. Nicole wanted the Serpent to be Lelie Odom Junior. He was a junior to a senior and was one of the stars in the hit play. Meanwhile, Ken believed the Serpent to be Daveed Digs because the Serpent mentioned digging themselves out of debt and that sounded like a clue to Ken. And so last up tonight was the Gremlin.

The Gremlin chose the song “Stand By Me” by Ben E. King. He has the growly sorta voice and he talked about getting fights as well as being a softie. Robin thought he was Jerry Lee Lewis. Jenny thought he was Mickey Rourke. Ken however believed the Gremlin to be Stone Cold Steve Austin. Only they didn’t need to wait for the vote to unmask someone.

The Gremlin chose to unmask himself and he turned out to be Mickey Rourke.

So Jenny was right on this one.