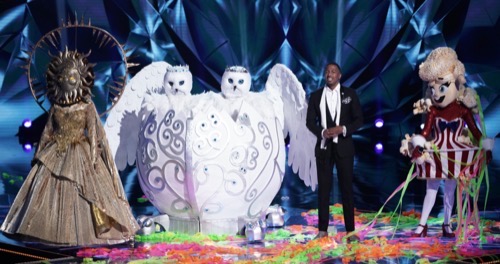 Tonight on FOX The Masked Singer airs with an all-new Wednesday, November 18, 2020, Season 4 Episode 9 and we have your The Masked Singer recap below. On tonight’s The Masked Singer season, 4 episodes 9 called “The Group B Finals – The Mask Chance Saloon,” as per the FOX synopsis, “The remaining four singers from “Group B” compete for a chance to advance, but with room for only two in the “Super Six,” two celebrities must be unmasked.

Nick introduces the panel and special guest panelist Cheryl Hines! She pretends not to know Ken, Tonight, the four remaining Group B singers will compete. There will be a double elimination.

The Seahorse is back. More clues are divulged. An associate speaks on her behalf, sharing that she is a hard-working performer who has put in a lot of work to get into the Top 6. She takes the stage to sing a Britney song. The panel is blown away. Another clue is shared. Seahorse has never been in a girl group. The panel makes some guesses; Kellie Pickler or maybe Sia.

Next up is the Crocodile. A friend shares that they are ride or die. The Crocodile is a competitor. He loves video games and more, hanging with his friend. The Crocodile takes the stage to sing a Leona Lewis song. The panel loves his song choice since it shows off his vocals. A clue is shared that he was in a cult classic movie. The panel makes their guesses; Jordan Knight, Jared Leto, or maybe Justin Guarino.

Whatchamacallit takes the stage after it is shared that he went to prom with a senior when he was much younger. It seems he is quite a dancer and ladies’ man. He takes the stage and sings Lean Back. The panel gets up to dance. Jenny thinks this was his best performance. The game-changing clue is shared; he previously won a championship. The panel makes their guesses; maybe Lonzo Ball. Possibly Carmelo Anthony.

The Serpent takes the stage. A mystery friend shares that the Serpent and himself were once roommates. The Serpent had some major setbacks until one day everything worked out. After singing, another clue is shared. He once performed with a member of the panel. They guess Dr. Elvis, Donald Fasion, or possibly Jamie Foxx.

It is time to vote. The first singer to move on is…..the Seahorse. That leaves three. Two will be going home. Whatchamacallit is going home. They are all sad to see him go. They discuss their first guesses and final guesses. Nicole is most embarrassed but they have some solid leads; Lonzo Ball, Carmelo Anthony. Whatchamacallit reveals himself. It is Lonzo! Ken is thrilled he was right.

It is now down to the Crocodile and the Serpent. The Serpent is headed home tonight. The Crocodile will advance. It is sad but they all want to see who is under the mask. The panel laughs, looking back at their guesses of Usher, John Legend, Dr. Elvis, and Taye Diggs. Nicole was right! It is Dr. Elvis. Ken gets very emotional thanking him for getting the world through a tough time. The doctor sings once more for the audience.