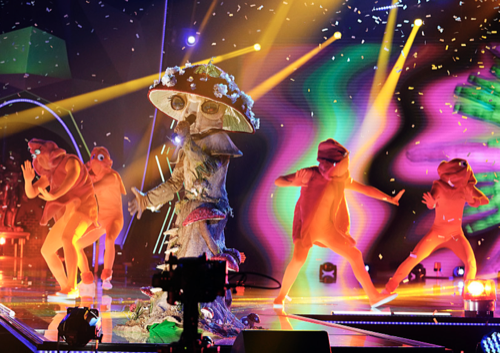 Tonight on FOX The Masked Singer airs with an all-new Wednesday, November 4, 2020, Season 4 Episode 7 and we have your The Masked Singer recap below. On tonight’s The Masked Singer season, 4 episodes 7 called “The Group C Play-Offs — Funny You Should Mask,” as per the FOX synopsis, “The “Group C” contestants return for their second performances of the season.

Tonight, Group C will sing for a spot in the playoffs. Before that begins, Wayne Brady becomes the guest panelist of the night after giving a great performance.

The Mushroom is back, sharing clues into a past where they felt like a loner and never fit in within a different culture. The Mushroom then sings, getting the panel and the guests standing and singing along. Jenny is impressed. Nick brings out a magic lamp to give them all a clue. The clue – a red brain. They all thrown except Ken who thinks it is Donald Glover. Nick eats some of the brains and grosses everyone out. Wayne thinks one of the Smith children. Nicole thinks Adam Lambert.

The Broccoli is up next. Before taking the stage, clues are shared. Broccoli talks about a classic he created. He then takes the stage and sings a Lionel Richie song. A clue is then revealed. The clue is a roulette wheel. Nicole brainstorms, maybe Wayne Newton. Ken thinks Martin Short. Wayne agrees. Jenny has really broken down the clues and thinks Jason Alexander.

The Squiggly Monster is up. He shares some clues; he is tall and loves to make people laugh.

It is time for the final competitor of the night, the Jellyfish. The Jellyfish reveals that they have been nervous about performing. They are close to their family, especially her dad, Papa J. A mysterious clue is revealed. Robin wonders if Jellyfish was going to her dad’s gigs as she previously revealed. Robin thinks maybe Sophie Ritchie. Wayne thinks Carol Baskin.

It is time to vote. The ballots have been cast. The singer with the least amp of votes is….Squiggly Monster. It is time for the big reveal. Nick reveals the panel’s first impressions. Jenny thought Bob Saget. Ken thought it was Fabio. They all laugh. Now he thinks Bob Saget. Nicole’s first guess, one of the Ying Yang Twins. Wayne thought it could be Bob Saget and stands by that.

Everyone chants “take it off.” It is in fact, Bob Saget! He shares that he wanted to stop by and spread some joy. Especially now.