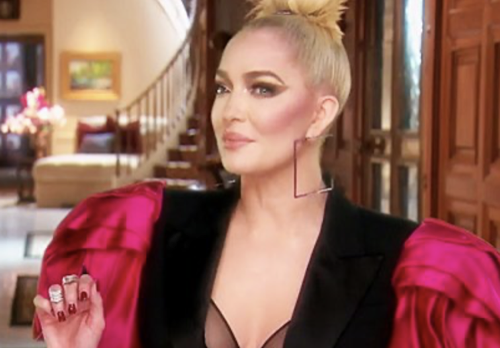 Tonight on Bravo The Real Housewives of Beverly Hills airs with an all-new Wednesday, September 16, 2020, season 10 episode 19 called “Reunion Part 3” and we have your RHOBH recap below. On The Real Housewives of Beverly Hills season, 10 episode 19 as per the Bravo synopsis, “The housewives made their concerns about Denise’s marriage known. Garcelle is grilled for her lack of support for Erika’s Broadway debut. Denise reveals the real score about her friendship with Brandi.”

Denise is called out for saying bad things about Teddi, so Denise hits back with saying that Teddi comes from a famous father and should not have brought up the fact that Brandi said she slept with her. Lisa tries to say Brandi brought it up on camera, Denise tells her to be quiet. Denise calls Brandi a train wreck and says she drinks a lot. Andy says that Brandi was so specific about the details of her encounter with Denise; he shows a clip. Denise says she did knock on her door, Aaron was there the whole time and nothing happened.

Sutton says that she didn’t know Denise at all in 2018, but she did hear a rumor that this was going on with Brandi. Andy moves on, he asks if Denise thinks the text messages between her and Brandi are fake, Denise says yes. Lisa has them printed out and offers to go through them with everyone. Garcelle is in shock. Denise tells Lisa to be careful because hers will be shown too. Lisa asks if she is threatening her. Kyle says she thinks it is a promise. Andy asks Denise if she will show the text messages, Denise says yes, if she shows the texts messages between her and Lisa as well. Lisa says they are private and this is not about her. Lisa asks Denise if she filed a cease and desist against Brandi? Denise doesn’t answer.

Garcelle asks Lisa why does she care, Lisa says because they have had to deal with it for the last six months. Andy asks Lisa what if it is true, and Denise is just trying to protect her family. Lisa says Denise just had to tell the truth. Garcelle says Denise can’t tell the truth because Lisa attacks her all the time. Denise asks Lisa why she keeps coming at her. Kyle says everyone has to be honest. Kyle says she just wants honesty and to move on with everyone.

We take a look back at Erika’s journey on Broadway. She talks about her relationship with Tom and how he welcomed her son with open arms. A viewer asks Lisa, who said that’s she couldn’t picture her daughter go go dancing for money, what is the difference between that, and posing half-naked on Instagram. Lisa says she guesses there is no difference. Andy says he was amazed how packed the house for her performance; Janet Jackson, Marc Jacobs came to see her. Unfortunately, Tom never made it, he left it for the last week and COVID happened.

Andy brings up when Garcelle called Lisa out for stealing Erika’s thunder. Garcelle says that she thought it was Erika’s time to shine and Lisa should not bring up the fact she did it eighteen years ago. Erika says she never felt that Lisa was butting in or stealing her shine. Erika thanks everyone for supporting her through the journey. Garcelle says she didn’t go to New York because she is not comfortable with small planes.

We take a look back at Lisa and Denise’s relationship. Andy asks Denise what she means by Lisa has changed. Denise says she has to eat something first and leaves the camera. Denise comes back and says she is done. Lisa asks her if she is so unhappy why doesn’t she just leave the show. Denise says Lisa is very different on the show, she has turned on her. Lisa says the turning point was Denise’s relationship with Brandi because she has seen the text messages. Lisa says that if she had done it over again she would not have had Denise on the show. Erika says it hurts her that the two are fighting. Andy asks Lisa where does she go from here with a 20-year friendship with Denise and she says she doesn’t know.

Andy asks Garcelle what was she the most surprised about being the new one on the block. She says that the show wasn’t scripted. Erika says it was a great year for her, but she hates conflict and discord. Lisa says she wouldn’t change anything about this season, she is a truth-teller and is going to tell people what she feels. Further, she has been on the show for six years, Dorit and her have moved forward. Kyle says they move forward by being honest, having someone on one conversations. Dorit says she has issues with some of the women, and now they are good friends.