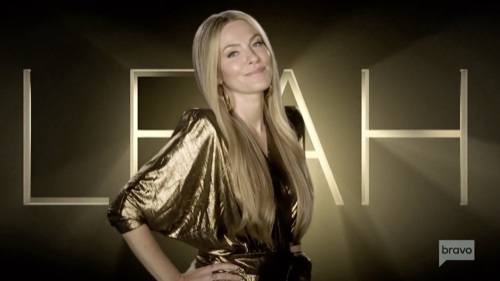 While across town Dorinda confirms to Sonja that she and John are officially on a break. Luann opens up to Leah about her relationship with drinking. The ladies take a day trip to a local orchard, where things get hostile between the group.”

Luann, Dorinda, and Leah meet with each other, while Tinsley visits her boxing trainer. Martin is not easy to talk to, but Tinsley tries while he is wrapping her hands. She talks about Dorinda and says she thinks she likes to fight. Martin tells Tinsley to pretend that he is Dorinda and hit him. He tells her that she is a doormat and that is why she is unhappy. She gives up. Martin tells Tinsley to just do whatever she wants to do, there will never be another her.

Dorinda tells Luann and Leah that Tinsley is like a mint her mouth, she just forgets her quickly. Luann tells Dorinda that Tinsley is from the south with an overbearing mother and that is why she is the way she is.

Sonja talks to Ramona about Tinsley and says that she is different since the breakup.

Luann goes to Leah’s apartment, she brought lunch for them. Luann is not crazy about the apartment, it’s a little small, and Luann can’t describe how she feels about it, so Luann says that Leah is humble. Leah asks Luann about the drink at the comedy show. She says she took a few sips, and she was ok. Luann says that she is at a point that if she wants a drink, she can have one.

Sonja meets up with Dorinda in the park and shows her a social media post that says she is taking a break from John. The breakup was hard, but she feels that she needs to find the right partner. Dorinda says her mom told her that she needs to be super selfish with herself right now.

Luann has made the arrangements for them to spend the day together, a limo van picks them up and takes them to a Weeds Orchard & Winery. Luann says it is going to be a perfect day. They go inside, start with some wine, and then go to the petting suit. Dorinda comes out with a massive wine glass, the ladies take pictures. Lunch is served. The girls toast, then Dorinda is asked by Elyse, what is going on with John.

She says she has changed, but he will always have a seat at her table. Dorinda feels like she really is able to mourn Richard, by finally being alone. Dorinda says that it’s not to tell people that kind of stuff because you open yourself up to criticism. Tinsley says it is called opening up, different rules for different people.

Dorinda gets her back up and tells Tinsley that her chewing gum lasts longer than her relationship. Then she says, she didn’t know Tinsley for the first 50 years and doesn’t want to know her for the last. The two arguing back and forth and Ramona doesn’t like it because Dorinda is really being mean. Leah interjects and says they have to hold each other up not bring each other down. Tinsley tells Dorinda that she seems like a bully and a mean person. Tinsley is really losing it and Dorinda is just ignoring her and turns to Luann and says what is that terrible noise.

Tinsley ends up leaving the table and walking away, Luann goes after her and tells her not to let them see her cry. Leah tries to calm down Dorinda, but there is no calming her down. Dorinda says she is going through a transition herself and this is not the story she wrote. Leah has the utmost sympathy for Dorinda, having to bury her husband, but that has nothing to do with Tinsley. Leah tells Dorinda that she wished they both didn’t hate each other so much.

Dorinda is feeding the goats, Tinsley goes to change her shoes; everything calms down. Tinsley climbs a tree, Luann walks up and sees her laughing, it’s a good sign. Time for the hayride, the women have wine in their hands, Sonja looks like she has a had a little too much for this early in the day. Luann makes an announcement, the hayride was an excuse, they are heading to the corn maze.

They are splitting up into two groups. Sonja is flirting with the owner. The women are still holding on to their wine glasses in the corn maze. Sonja and Leah stop and go pee in the cornfield. They leave the cornfield and Sonja is so drunk that she doesn’t shut up. Dorinda and Ramona talk, Ramona thinks she just needs to focus on herself and stop thinking about what everyone else thinks.

Back inside, Sonja is just losing it and more wine is being poured. Sonja starts becoming inappropriate, and a hot mess. They all start talking about sex, and Sonja makes a comment towards Tinsley, thankfully it went over her head. Luann says it is time to go.