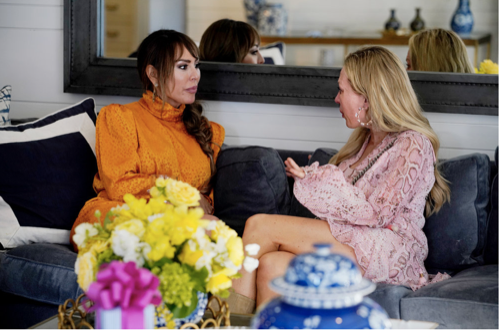 Tonight on Bravo TV the original housewife series, The Real Housewives of Orange County returns with an all-new Wednesday, December 30, 2020, episode and we have your RHOC recap below.  In tonight’s season, 15 episode 12 as per the Bravo synopsis, “Shannon talks about her girls testing positive for COVID. Elizabeth talks about growing up.”

Lake Arrowhead, California: Elizabeth talks about her growing up, from 0 – 13 she was raised in this religious environment, her grandmother was the head of this religious cult and her father was one of the main preachers as well. As a young girl she knew something was wrong with the church. They couldn’t wear anything else but this uniform, they couldn’t eat anything else than what they made them, or what they shot.

They couldn’t leave the ranch, they were stuck on a commune, they couldn’t even go to the hospital. They knew how to control every single person on that property. She felt for years that she had to hide her sadness and show people that she was happy. She found that laughter attracted people to her and it was easier to live in a fantasy world of happiness than live in her reality and depression. She is worried that if she starts talking about this, everything that she has created, everything who she is, is going to go away.

She carries the burden that she did something wrong her whole life, but lucky enough she has a great family. Elizabeth opens up and tells Braunwyn all about her upbringing, who admits she regrets bringing up the petty stuff with Elizabeth, she could have been a better friend and she regrets that. She really wants to make big amends to her. Elizabeth tells her that she needs therapy.

Shannon tells John that she wants to go home, and wants to know the plan. He says he doesn’t think it is a plan that either of them are going to like, they haven’t spent any real time apart in a year. He thinks that he has to stay there. Her three girls tested positive for COVID, she was negative along with John. She and John have had a lot of problems during COVID. There is a shift in energy.

Emily is outside trying to keep the kids as sane as possible, they are into the second day of Shane’s hospital stay. Her daughter, Annabelle is talking to Shane on Facetime, Keller joins in. The kids know their dad is sick, but they don’t understand the gravity of it, and she doesn’t explain it further to them. Emily is having a hard time not being with her husband when he is so ill.

At John’s house, Shannon is leaving and is really upset, she doesn’t know when they will be together again. She is also worried about Sophie, she is starting college. At home, she gets upset that the laundry is not done and Archie’s droppings are all over the back yard. The girls are healthy enough to sit in a lawn chair, they can clean up after themselves then.

Elizabeth and Braunwyn finish their hike and join the other ladies for fishing. They end their day with cocktails, Elizabeth is happy that she opened up on this trip. They relax and start making dinner. Shannon calls, the women tell her that they are making enchiladas, she says she got a phone call, she tested positive. The women start to freak out, they were all just with her, are they going to get it? They tell her to rest and get over it. They talk a little bit about COVID, then Braunwyn calls Sean and tells her that Samantha tested positive and she is scared. Sean calms her down, but their relationship is very co-dependant and not healthy. Sean tells her that she is probably fine. Braunwyn is still freaking out, she says the trip isn’t fun anymore and she wants to go home.

The next morning, the woman are packing up. Kelly says that her wedding date is planned for 10/10/20 and she is not going to let some virus get in the way of that. Rick has never been to Napa and they are so excited.

The ladies are having eggs together, they are really feeling that COVID is getting very scary. They heard from Shannon, she and her daughter are having troubles breathing. Braunwyn calls Shari her wife, she says she is very important to her and she loves her. They facetime Shannon who tells them that is scary. They are all having problems breathing. Kelly is having anxiety, she thinks that maybe she shouldn’t go to Napa after all. Lisa, the COVID testing nurse calls Kelly and tells her that she may have been in contact with someone who tested positive. She needs to quarantine just in case, no Napa now.

One week later, Emily is happy that after eight days Shane is coming home. She never wants to be in this situation again where she has to take care of her kids on her own and she appreciates him more than she has ever before. They pick up Shane at the hospital, he just wants to go home, shower and lay down.

Even with COVID, the women are petty on the telephone, they can’t stop themselves from gossiping.

Rick and Kelly are sitting with her daughter going over the courses that she has to choose, she and Rick get along really well, they are really similar. Living in the burbs has been good for all of them, Kelly has seen changes in Julie. But as soon as she graduates she wants to go back to the beach.

Elizabeth tells Jimmy that she told Braunwyn everything about her past, she opened up and Braunwyn was a gem.

Emily visits Braunwyn and tells her about her experience with COVID. She says Shanon has been a big support. Braunwyn tells Emily about Shari moving in, and Sean doesn’t like it. He gets jealous of the time that she spends with Shari. Emily says she shouldn’t put herself in a situation where she has to deal with more things. Braunwyn admits that when she closes her eyes and has a fantasy, Sean doesn’t have a starring role.