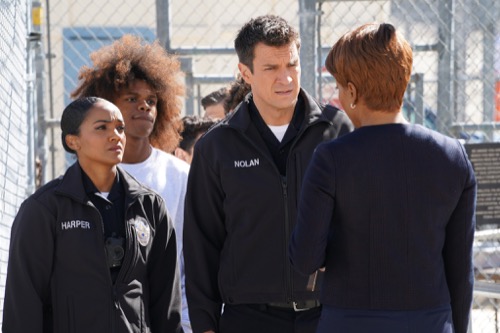 Tonight on ABC their new series The Rookie airs with an all-new Sunday, May 3, 2020, season 2 episode 19 called, “The Q Word,” and we have your The Rookie recap below. On tonight’s The Rookie season 2 episode 19 as per the ABC synopsis, “Their rookie year is coming to an end and officers Nolan, Chen, and West are about to be squeezed harder than ever before as their training officers evaluate whether they are truly ready for the job. Meanwhile, after one of their rookie classmates is involved in a shooting, the team uncovers some unsettling evidence.”

John and his friends from the academy all meet for drinks. John talks with a female officer friend outside who is worried about one of their own, Chris. He barely passed his exam.

Lucy wakes next to her new love interest. She needs to get to work. She has 30 days left with her TO and then she is on her own. She asks him to keep their relationship on the DL at work.

At the morning meeting, Grey tells the rookies they have 30 days to make it. They hit the road. Tim asks Lucy why she has been smiling so much. She isn’t sharing. Meanwhile, Angela is sick of dealing with her family and her wedding. Harper and John talk about her custody hearing today. After he comments it has been quiet. She freaks. He is going to jinx them. Moments later they listen to a high-speed chase on the radio involving Chris from the academy.

Harper and John arrive to chase the vehicle after it stopped and shot the officer Chris. Back at the scene, Chris’ TO is devastated. Tim talks him down. Jackson rides in the ambush with Chris.

Harper and John follow the driver into a building when he stops and makes a run for it. Jackson watches as doctors and nurses work on Chris at the hospital. Back at the scene, Tim reprimands Lucy whose love interest is working for the Fire Department. He tells Tim to calm down. Lucy gets mad.

Harper and John meet with a detective and get a print on the vehicle. They send the ID to Tim and Lucy who head to an address. Their suspect Serj isn’t there. They dig further into Serj’s background and realize he is being fed intel. They have a dirty cop on their hands.

Grey tells Angela they have a mole in the department. He makes her acting detective. The only place they know to look is at the home of a man named Reuben. He is connected to Serj. John heads there with the senior detective. They breach the home and bring Rueben in. Meanwhile, Jackson watches as Chris struggles.

Back at the station, John submits things from the home into evidence and realizes there is a gun missing. John heads to tell Grey who is angry. He just got word Chris is dead and the gun is a murder weapon.

Its nightfall, Lucy and Tim are on the road. Lucy wants to talk about it earlier. Tim doesn’t want to. He wants Lucy to stay focused. He mentions he knows all about Lucy and the fireman. He tells her not to write him off. Jackson calls to tell Lucy about Chris.

Armstong, John, and Harper look for the gun. It had to have been taken by an officer. They head to question Rueben. Meanwhile, Angela realizes that one officer shut off her camera during the raid. She is the same girl, Cole, who told John she was worried about Chris. Angela tells Grey.

Grace visits John, bringing him food. He doesn’t talk to her in-depth about their situation. John and Harper are called to track down Cole. They end up in a high-speed chase alongside Tim and Lucy trying to get Cole. Cole crashes her truck and runs for it, bringing them through Rose Bowl Stadium. John comes upon her. She explains she had debts. She had to and when she tried to get out she couldn’t. Right when it looks like she is going to put down her gun, Armstrong arrives and she points it at him. He shoots her. John tears up as he calls it in.

Back at the station, IA asks John to give a statement. At home, Jackson cries while Lucy hugs him. Lucy’s love interest Emmitt shows up to apologize. He leaves after she accepts to console Jackson.

Harper shares with John that she got her kid back. John heads back to watch his camera and realizes Cole said Armstrong’s name before she even saw him. Across town, Armstrong meets with Rueben.