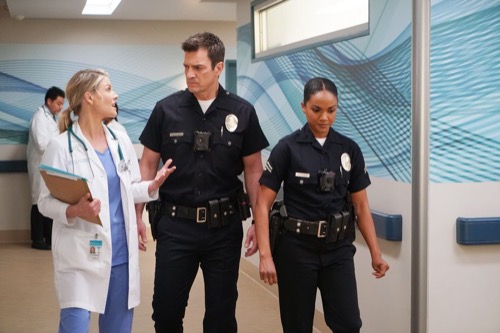 Tonight on ABC their new series The Rookie airs with an all-new Sunday, February 23, 2019, season 2 episode 11 called, “Day Of Death,” and we have your The Rookie recap below. On tonight’s The Rookie season 2 episode 11 as per the ABC synopsis, “Officer Nolan and the entire team are in a desperate search to rescue Officer Chen after her abduction and must attempt to get Rosalind to help them in their search.

Meanwhile, after Officer Lopez discovers Wesley unconscious from a dangerous cocktail of alcohol and pills, she is forced to keep him close by.”

Lucy comes in and out of consciousness. She is being tattooed with the date of her supposed to die.

Angela and Wesley are sitting together at the kitchen table and she cries. She asks him if he was really trying to kill himself. She is called out of work to deal with this.

Meanwhile, at the precinct, no one has seen Lucy. After grouping together and talking about what they know they determine that no one has seen her for 13 hours and she was last seen with a guy named Caleb at a bar the night before.

Lucy is in a living room duct tape to a chair. Caleb comes in he’s been eating, he would offer her some but he doesn’t want her to throw up. She asks for some water and he gives her a little sip. He tells her that her kidnapping was a happy opportunity but it wasn’t planned.

John and his partner go to visit one of Caleb’s victims who they managed to save. She is still in the hospital and was also tattooed with the date of her death. They ask her for anything she can tell them about Caleb.

Back at the precinct, the team has come to realize that Caleb is a mentor of a notorious serial killer that they have in custody. Tim calls Angela to tell her what is going on. She tells Wesley that they need to get dressed because they’re going together to help.

Lucy manages to break free and is ready for Caleb when he comes back into the living room. She knocks him down and makes it out the front door quickly realizing she’s in the middle of nowhere. She hesitates but starts to make a run for it and it’s taken down by a tripwire. Caleb comes out to punish her and drag her back into the house.

Angela arrives at the precinct. Tim is acting funny, extra irritable. He finally tells Angela that he blames himself for Lucy being taken he is the one that told her to go out and focus on something else.

John is asked to talk to Caleb’s mentor Roslyn since she is taking a liking to him. John meets with Rosland in please on her weakness. Caleb has stolen her thunder and she has an opportunity to come back to the center of things if she tells them where Caleb is.

Caleb has Lucy‘s wrists zip-tied as he forces her out into the middle of nowhere. He takes out a gun and forces her to get into an oil barrel. He takes a picture of her before he shuts the lid on her.

After doing some digging John realizes with his partner that Roslyn and Caleb have been communicating by way of contraband. They need to find the person who controls that contraband within the prison. They get a tip that has Tim and Jackson working the streets to find a smuggler. After a little bit, they realize that they’re not going to get the answers they need in time so it’s up to John to go back to Roslyn and persuade her into telling him.

Armstrong is visiting his wife’s grave when Caleb steps out from behind a tree. He tells Armstrong that he needs to come with him or Lucy will die. He shows him the picture of Lucy. Armstrong heads to the car and as he does Caleb leaves a picture of Lucy on the ground with a phone and a message about how he has two cops in custody.

A short time later, the Chief and Angela find the picture and phone in the cemetery. Lucy has managed to break the zip ties from her wrist but after she punches wildly at the top of the story oil barrel she begins to lose oxygen.

Caleb and Armstrong arrive at the house. There is a barrel there and Khalid plans to kill Armstrong and put him in it. Meanwhile, the team draws a connection between a post office box, Caleb and some land that Roslyn now owns from an uncle.

John and his partner arrive at the house quietly looking in the windows to see Armstrong and Caleb inside. John kicks the door in while his partner shoots the window. She shoots Caleb with a bullet to the abdomen. They try to help them to find out where they see is because they work on him he dies on the floor. The rest of the crew arrives and they quickly scramble to find Lucy.

The desert for miles, they scour the land. Tim finds something on the ground that leaves him to loose dirt. He starts to dig in now. They pull her out of the barrel and he works to give her CPR as she is unconscious. She finally comes to. Tim holds her as she cries.

Lucy weeks in the hospital to see Tim who has most likely been there all night even though he pretends he hasn’t. The rest of the gang shows up with stuffed animals and flowers.

Back at home, Wesley is getting ready for work. This whole thing with Lucy has given him a serious perspective. Angela kisses him.

At the precinct, Armstrong shows up ready to work and tells the sergeant this is where he needs to be.

John visits Rosland and tells her how Caleb is dead. They have all of his notes and they know all of her secrets so they’ll be no more deals. She tells him there’s one last secret and it’s about Armstrong. He doesn’t want to hear it but she knows he’ll be back.