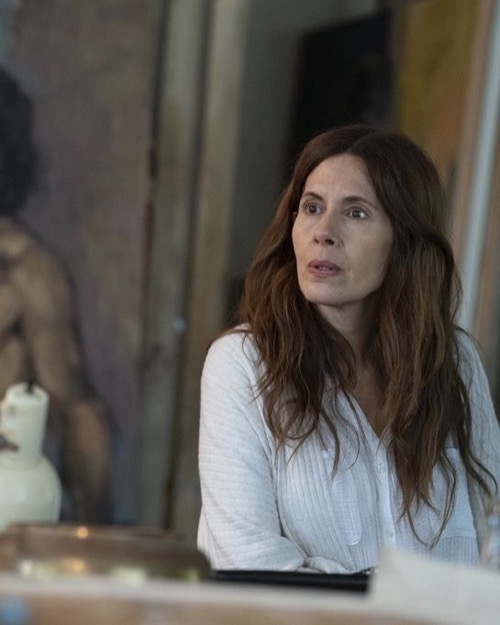 Tonight on the USA Network their new drama The Sinner premieres with an all-new Thursday, February 27, 2020, and we have your The Sinner recap below. On tonight’s The Sinner season 3 episode 4 “Part IV” as per the USA Network synopsis, “Ambrose chases Jamie around New York City to try to stop another homicide.”

Jamie and Nick sit at a cafe, drinking. Nick wants him to do something that Jamie doesn’t want to do. Nick tells him he has every in the car.

Nick gets on a bus, escaping from Ambrose who is tracking him. Jamie is headed out of their jurisdiction. Jamie arrives in New York City. Leela calls. He ignores it.

Jaime slips into an art showing where he runs into an old student. She gets them to take a selfie with her, telling him how all the girls had a crush on him.

A short time later Ambrose tracked Jaime down he is on the roof of the art gallery. He’s thinking about jumping. He almost does but decides against it. Ambrose tells him he’s going to follow him all night if he has to.  They end up at a bar. Jaime orders a whiskey well Ambrose asked him about a paper game he and Nick used to play, a game of chance. Ambrose asks about Sonya and the connection but Jaime tells them there is no connection it was just chance. Jaime starts to talk about how the whole world is chaos and everybody is just biding their time with addiction and what not until they all die. Ambrose thinks it’s Nick talking but Jaime says he’s going to prove it to him.

Jaime saddles up at the bar talking to two guys who are interested in two girls. He gets them all together and they begin to party. Jaime introduces Ambrose as his uncle Harry.

Jaime is digging a hole in the woods. Nick asks him if he needs a break. He takes a break while they talk. Nick wants to do things different this time. There’s a woman up the road and he wants to bring her into the woods. Jaime is against this whole thing and after a little bit he asked Nick if he’s ever done this before. Nick admits he has. Jaime freaks a little but begins to listen to Nick’s reasoning that they need to look death in the face in order to be free.

They are all in a hotel room snorting cocaine and drinking. Jaime tries to get Ambrose to do it too. After some laughter and talking, Jaime starts to question one of the guys who is flirting with one of the women. He comments about how this all seems desperate and forced and how they are all buying time. The guy gets mad and tells Jaime to get out, Ambrose agrees they need to leave.

When they leave the hotel room Jaime gets a taxi and gets in leaving Ambrose behind after they argue on the street.

Upstairs at the party, Jaime watches as a A man claims he can talk to the dead. He tells couple of people in the room a few things before moving his focus to Jaime. He tells Jaime that somebody is near him and talks about a prickly pear. The message sends Jaime running.

Jaime gets in the car with his former student and they go on a ride. Jaime talks about facing death and how he used to play a game with his friend Nick. He drives the car as fast as he can, terrifying his student, while Ambrose follows. He finally stopped playing the game with his student jumping out of the car terrified.

Nick and Jaime are in the woods. They both have blood on them. Nick isn’t doing so well. Jaime wants to call 911 but Nick tells him they’re almost there.

Neck is starting to die when he tells Jaime that something is in his back pocket. Jaime doesn’t really understand what he saying as he watches his friend die.

Ambrose and Jaime at home. Amber’s drops him off at his house. Jaime talks about how he constantly feels lonely no matter how many people are around him. He asks Ambrose if he feels the same way. Ambrose explains that he does sometimes and he understands what Jaime is describing. Ambrose wants Jaime to tell his wife what is going on.

Outside in the care, Ambrose takes some pills, something he never does while looking upset. In the morning, he wakes in his car in front of Jamie’s house. He checks his messages and is brought to the scene of a homicide. It’s the man who told Jamie someone was around him.