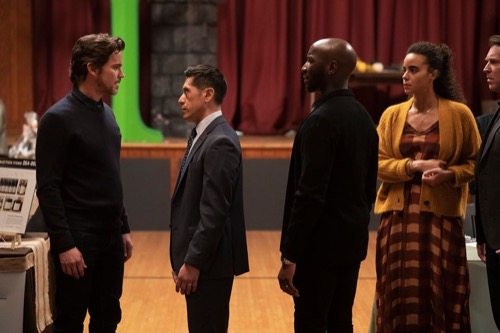 Jamie is at school. He calls Leela. She doesn’t answer. She is with Ambrose, talking about the death of a man. Leela asks if Jamie did it, she needs to know. Ambrose asks her more about Jamie, his past, his family. She explains that Jamie has never been violent and never even got angry when she had an affair. They worked through it.

Ambrose’s coworker apologizes to him back at the office for telling their boss about him not following protocol.

The Past – A young Nick and Jamie make friends after Nick comes to his aid in class.

Present Day – Ambrose and Sonya are sharing a flirty moment in her kitchen. Jamie is watching from the outside in the dark.

The Past – A young Jamie and Nick hang out reading from a book about God.

Present Day – Sonya’s home alarm goes off. It’s Jamie. He has let himself into her home. He wants to know why she is stalking his wife and sleeping with Ambrose who is watching him. She has a gun for protection. He sees her work. She has been painting him. He wants to know why. She explains that she is trying to understand him but it is hard. He tells her she isn’t in control. She grabs her camera. He lets her take photos. She asks if he will pose nude. He takes off his clothes. He agrees, asking about her relationship with Ambrose.

Jamie meets with Leela. They talk. He tells her he has always felt like the world is living wrong. He came to realize that more when he met Nick. She asks him if he killed the man in Brooklyn. He admits he did, he lost control.

Ambrose and Sonya talk. Ambrose cannot figure out the trigger between Nick and the man Jamie killed in Brooklyn. Sonya thinks he just wants to be seen.

Jamie is at school proctoring an exam when the principal comes in. She told him another teacher would do it. She wants him to go home. They are interrupted when one of the students begins to shake. They rush to help her. The others share that she took too much Adderall.

A young Jamie and Nick stand on a bridge. Nick takes a flying leap after letting fate determine he should jump. Jamie crumbles to the ground looking scared.

Present Day – Jamie consoles his student in the hospital. When her mom arrives she asks Jamie to leave.

Ambrose’s daughter asks him not to come around for a while. After her son saw him punch another man, she feels they need space.

Ambrose calls Jamie and leaves a message. They need to talk. Meanwhile, Jamie shows up to see Leela where she trying to sell her products. He acts out, getting several of the men to interfere. They ask him to leave. Everyone stares. He is escorted out by an officer there who tells him to go home. In the stairwell, Jamie beats a chair against a wall and screams.

The Past – Jamie is upset at Thanksgiving dinner. He couldn’t jump. Nick tells him they can try again, live a little, put their fears aside.

The Present – The officer at the school goes to the station and details Jamie’s behavior to Ambrose. Ambrose heads out to meet Jamie to talk. They talk about Nick. He told Jamie that he needs to embrace his fears. He knows that is true. He tells Ambrose he wants to show him something.

He brings Ambrose out into the woods. He shows him a grave they dug together. He and Nick used to bury each other, they could touch the void. Now he wants to do it with Ambrose.

Ambrose agrees after some back and forth. He lets Jamie bury him alive. Ambrose starts to struggle.