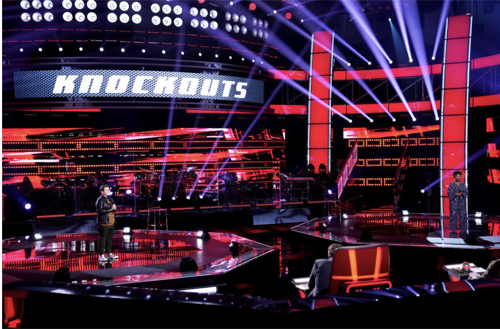 Tonight on NBC’s Emmy Award-winning musical competition The Voice airs with an all-new Monday, November 24, 2020, season 19 episode 11 “The Knockouts Part 3,” and we have your The Voice recap right below. On tonight’s The Voice season 19 episode 11 “The Knockouts Part 3” as per the NBC synopsis, “The “Knockouts Rounds” continue. Each artist is paired against a teammate to perform individually while their direct competitor watches and waits. The coaches alone will choose the winner from each Knockout to advance to the live shows. Each coach will have one steal in the “Knockout Rounds.”

The judges take the stage. Tonight will feature a 4-way knockout. Team Kelly has been working with Usher. Singer Marissa spends time with the pair, showing off her talents. She will compete against Tanner. Tanner also has a practice run with Kelly and Usher. They give him some pointers on making the song his own.

Marissa takes the stage and sings Turn Back Time By Cher. They love it. Tanner is up next in his cowboy hat. He sings A Real Good Man. Kelly cannot believe how great her team is. Blake loved both of the performers. Blake would choose Marissa. For John, Tanner was full of energy. Gwen loved them both. Kelly chooses Tanner.

John and Usher meet with two members of his team. Cami and John arrive to meet their coach. Cami performs. They think she is great but suggests she add her own spin. John performs next. They love John’s voice and the high notes he can hit, calling his range limitless.

John takes the stage next, competing against Cami. Kelly stands in amazement. They are all blown away. All of the coaches express how great they both did. John Legend picks John to move on. Kelly quickly picks up Cami. Cami is thrilled to have another opportunity!

The coaches work with their talent for the 4-way knockout. Gwen works with Usher and her singer, who is just 15 years old. She will be singing an Adele song. For John, thinks he has the edge over his singer. Blake doesn’t think his singer Taryn has any worries. Usher works with all of them to get ready.

Team Blake’s Taryn sings first. She gets a round of applause for her exciting performance. Julia from Team Legend is up next. John cheers her on. John stands after to applaud. Team Gwen’s Larriah goes next. Team Kelly’s Ryan is the last to sing. She cheers for him.

All of the coaches are blown away. So many great performances. They ask America to vote for their teams. Voting opens with the results of the 4-way knockout to be revealed at the live show.