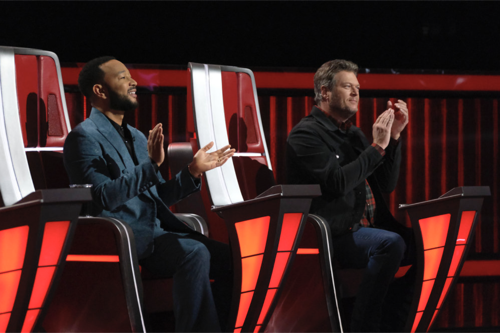 Tonight on NBC’s Emmy Award-winning musical competition The Voice airs with an all-new Monday, December 14, 2020, season 19 episode 17 “Live Finale Part 1,” and we have your The Voice recap right below. On tonight’s The Voice season 19 episode 16 “Live Top 9 Results” as per the NBC synopsis, “In the final phase of the competition, the final artists perform in front of the coaches to compete for the title of The Voice.”

It’s Part I of the Live Finale! The contestants have put in the work. They trained with their coaches and even with celebrity mentors and now they were ready to give their final performance. Up first was Carter Rubin. He was fifteen years old and its been a journey for him unlike any other. Carter was just so happy that two of the judges turned for him that he didn’t think pass this. He didn’t think about the Battles or the Knockouts or the Live Performances. He just took each moment as it came and now he was in the Finale. Carter was there thanks to his coach Gwen. He’s been with Team Gwen from the very beginning and she’s truly treated him like one of her kids. And he saw her as a surrogate mother.

Carter chose the song “Climb” by Miley Cyrus. It was about a young artist coming into their own and so it fit him real well. He gave it the emotion it needed. The song also gave him opportunities to go for those high notes and still sound great with a lower register and so Carter sounded amazing tonight. His voice was perfect. The other judges were even fans of his and Blake told Carter how amazing this performance was. Carter’s own coach said the same thing. Gwen was proud of Carter and how great he sounded tonight. Next up was Desz. Desz has been working with a songwriter and she’s found a great original song. This new song was about triumphing over the dark. It was about 2020 in general and Desz’s voice sounded killer.

Desz is a talented woman. She has such a strong voice that its sometimes odd to hear her in everyday life because she’s so shy and she snorts when she laughs. She also tends to laugh because she was nervous. So, the snort comes up several times. Desz could be embarrassed by it and she never is. She just continues to laugh. Desz has a great personality as well as voice and so Kelly loved working with her. The two have a great dynamic. They’ve both have been through a lot this past year and Desz’s original song was exactly what they needed to hear after everything. It was truly a great song. It will be sitting with the audience for a long time to come and soon it was onto the next one.

Ian Flangian was next. He has one of the most original sounding voices in the history of “the Voice” and surprisingly it hasn’t been easy for him on this season of the hit show. It began when only one person turned for him. It was just Blake who turned. Blake loved Ian’s voice and so he selected Ian for his team, but Ian didn’t have it easy in the Battles or any of the rounds and it had taken Instant Save to keep him in the competition. Ian had packed bags several times this season. He’s thought he’s been going home from almost the start and so its surprising to him that he’s still there. Ian was a singer/songwriter. He thought he would just come from the experience and instead the audience seems to be loving him. And no one was more amazed than Ian about that.

Ian chose the song “In Color” for his first performance. It was a great song selection for him because it did wonderful things for his voice and tonight felt like a concert. Ian travels the country performing. He and his family travel all around ready to take every venue they can get and so he was great performer. Sometimes people can be great singers and at the same time horrible performers. Like they should stay making music videos to highlight their artistic side because a stage performance might be too much for them. Its bit like actors with interviews. Ian was lucky he didn’t have to worry about that problem and again he sounded great with this song. Song selections are important too.

Next up was Jim Ranger. He was performing his original song for his first performance and it was about what it takes to make a marriage work. Jim has been married for eighteen years. He married the daughter of his mother’s best friend and so he likes to joke that it was an arranged marriage, but it lasted because of the two people involved. They worked on giving their marriage change and its paid off. They were parents of several beautiful children. Jim was also happy. He was married to his best friend and so the songwriter really did him a favor by giving him this song. This was the perfect song for him. People can play it at their weddings and it also highlighted Jim’s performance style which was very much him. and so the original songs have been hitting it out of the park a lot.

Jim was Team Blake. Blake was also getting married soon and so he can use this song as both a guide as well as a wedding song. Blake mentioned to Jim that he sounded like an old time country singer. The singer he was talking about was no longer performing and so that cleared the way for Jim. There was no one that sounded like him out there. Up next was John Holliday. John was the one performer who didn’t look anything like his voice because when people turned and saw that he was a man and not a woman – there was just so much shock. Kelly’s jaw dropped when she saw John for the first time. The others kept replaying the moment because her jaw truly did drop and it was very funny.

John truly was the judges’ favorite with that alone. He was also incredibly talented because he has such much range that no one else can touch him or sound like him. John stood out. He was given an original song about standing out. It showed off his impressive skillset and the fact that he was classically trained. It was also rather catchy. John’s voice was great. His coach and fellow John thought the same. John Legend only had one contestant in the Finale. He was hanging all his hopes on John Holliday and the same could be said of Gwen with Carter and Kelly with Desz. Desz went on to have her second performance of the night. She performed “Landslide” which she chose because she wanted to be vulnerable and that was the perfect song for it.

Desz has gained confidence over this past season. She was happy with going spiritual like she did with her original song and she also wanted to show all the facets of her voice because her voice is like a diamond. Only Desz hadn’t known that about her voice. She came on the show and she didn’t think anyone would turn for her. She thought she would just be singing to the back of their chairs, but then they all turned seemingly at once and she had her pick of the judges. She chose Kelly because she was a huge Kelly fan. It also didn’t hurt that Kelly has been on a similar show as a contestant and knew what it was like to be in Desz’s position. And now the two of them got on like a house on fire.

Next up there was a performance from the judges. The judges often performed during the Live shows. Tonight it was Gwen Stefani and her fiancé and fellow judge Blake Shelton who performed “Happy Anywhere”. It was prerecorded because not everything could be fitted into one show with all the health guidelines in place and still it was a beautiful performance from both parties. They worked great together. It makes sense that they ended up dating and were now going to be married. After these two, it was Ian’s turn again. Ian was performing his original song about becoming a parent and deciding what kind of parent you wish to be. Do you want to teach your children caution? Optimism?

This song was something that easily resonated with Ian. Ian was a parent himself. He knew what it was like to experience such an overwhelming love and he was able to give a stellar performance because of it. The song also connected with the other judges. They all loved this song and they were proud of how far Ian has come. This song was truly made for him and his voice. Up next was John Holliday. He and his coach were known as the two Johns and it had actually been his coach that stopped him from being a four chair turn. Mr. Legend had blocked Kelly. He knew Kelly would want John and so he made sure to stop her and if he had more than one block he would have used it on the others too.

John performed “Halo”. He wanted to got softer with his second performance and instead he showed off that impressive range of his. He was made for the Beyoncé song. John’s voice had been perfect. He sounded beautiful and he even received a standing ovation from his coach who constantly remains inspired by him. Another thing that was amazing to see, the crowd applauded the band. The band has been working all night in showcasing the contestants and they needed some love too. It was glad that the show remembered them before it was too late. There was still a few more performances to go and up first was Carter. Carter performed his original song. This was the first original song he’s ever performed and the kid was adorable little star.

Carter’s voice sounded great with his original song. His coach was very proud of him because she’s seen how far he’s come and so now its up to America. America will decide the next winner of the show. As for the final performance, that went to Jim Ranger. He performed “With A Little Help From My Friends” and it ended the show on such a high note. He energized the crowd. He got them on their feet rocking out and it left him in their memories as they began voting.