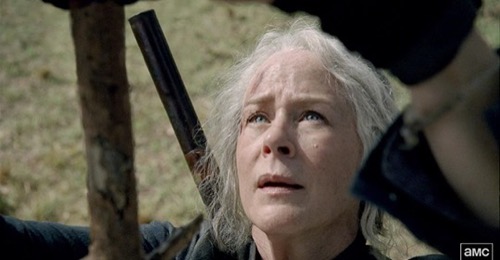 Tonight on AMC our favorite show The Walking Dead airs on an all-new Sunday, March 29, 2020, episode and we have your The Walking Dead recap below. On tonight’s The Walking Dead Season 10 Episode 14 called, “Look At The Flowers,” as per the AMC synopsis, “Heroes and villains reckon with the aftermath of the Hilltop fire. Meanwhile, Eugene takes a group on a journey to meet Stephanie, with the hopes of befriending another civilization.”

Tonight’s episode of TWD opens with us seeing Neegan, he is in a prison cell and Carol walks in. She asks him what he wants, what if he didn’t have to die. He says he didn’t know she had a say on the kangaroo council. She tries to make a deal with him, to take care of Alpha, she tells him it will help every man and woman. She says she needs him to bring her Alpha’s head and that is what people will remember him for, they will forget the past. He asks if he has her word, she says if he does it fast.

We then see Carol put Alpha’s head on a stake. Neegan is there and asks her if this is what she wanted, she nods yes. Neegan tells her that they should get moving. She turns around and asks him what took him so damn long. He says he wanted to get out alive, it took time. She tells him that she is not going back, not yet. He says if he goes back without her there is a noose around his neck. She tells him to wait, or don’t wait, he is a free man and can do whatever he wants; she needs to be alone and shit like that takes time.

Ezekiel has the children safe, he tells Jerry. Amanda walks in, Jerry is thrilled that she is ok. Rosita is not doing that well, Eugene is with her. Eugene announces to the group that he has been in radio communication with someone outside their orbit, her name is Stephanie. Ezekiel asks him how long he has been keeping this from them. Eugene says when he relocated to Hilltop, he struggled for a while and then is when he found Stephanie. After everything they just lost, he is willing to be the fool.

Yumika tells Magna to take her horse and go with Eugene, she never liked being cooped up. Ezekiel says goodbye to Jerry who says he is going to miss him. Jerry gives him a big hug.

Beta finds Alpha’s head on the stake, he is with two of the whisperers. One of them says to Beta that he is the alpha now, Beta says be quiet, she can hear you. He pushes the man closer to Alpha’s head and she bites the side of his face. Beta takes her head and cradles it in his arm, the other whisperer runs as fast as he can away from them.

Negan arrives at a small cabin, he gets in the head by Daryl who demands to know where Alpha is. Negan says he killed her, he got close enough to them so he could slit her throat, that is why his girlfriend let him out of the cell.

We see Carol, she is walking through the woods and thinks she heads something. She turns around and sees Alpha who says she is always watching.

Beta is walking through a town with the whisperer that now has the bite on his face, they see walkers coming towards them, Beta stabs the whisperer and throws him at the walker to be eaten, then he pulls the bag in his hand with Alpa’s head in it close to his ear and listens to her. Beta goes into what appears to have been a bar at one time and walks towards the back, there is a bed and a table with a bottom of alcohol and a glass. On the table there is a note, Beta reads it, “these 2 eyes see 2 truth.” Beta puts the note in his jacket, then he sees a rifle on the ground. There is a poster on the wall and a guitar close by, he rips the poster off the wall and breaks the guitar.

Carol is walking still in the woods, Alpha is behind her and says that she is all alone in the woods just like Sophia. Alpha tells her that she respects what she did, Neegan used the blade but she is the one to do it, a true Alpha. Alpha says to Carol that she has tried to be alone before, but they always wanted her. Alpha asks her what does she want. All of a sudden, there is a walker behind Carol and he almost gets her.

Eugene, Yumiko and Ezekiel are on their horses, Eugene tells Yumiko that they are on a journey to change mankind. They pass by some cages that have walkers locked inside of them. Eugene says it is not the whisperers, they don’t do this kind of thing. Ezekiel wonders off a bit and gets off his horse to take care of some walkers, he starts coughing and almost falls to the ground, he is sick.

Daryl and Neegan are walking through the woods, Neegan has hands tied behind his back.

Back to Beta, he is looking at an album, it looks like he was a singer before all of this. He puts a record on the record player; all this does is attract walkers.

Its dark, Carol is still walking, Alpha is still there with her and won’t stop talking. Carol arrives at a barn, she goes inside and tries to pull something from the top of the roof, all of a sudden, a whole part of the roof comes down on her, Alpha calls her stupid.

The whisperers catch up with Daryl and Neegan, pulls a gun on him. Daryl drops his weapon and Neegan starts to laugh, they call him the new Alpha.

The country music is still playing, the walkers are getting closer to Alpha, he tears off some of his mask.

Now, Daryl is tied up, Neegan says the first order of business, one he has a shotgun in his hand, Neegan tells Daryl to kneel to the Alpha. Neegan says it is starting to get real now. He tells Daryl that he likes it a lot. Daryl tells Neegan that he should just shoot him. But, Neegan shoots one of the whispers and then he and Daryl take care of the rest. Daryl tells Neegan to untie him.

Ezekiel is by the fire laying sown when he horse falls to the ground. Ezekiel is upset, his horse bit. Eugene and Yumiko watch as he stabs the horse in the head, he had no choice. Ezekiel tells the two he should not have come, he tells them that if he falls, he wants them to leave him behind. Yumiko tells him that they needed the man that built the kingdom with him.

Carol is still pinned under the rubble, a walker has noticed her and is slowly crawling towards her, Alpha calls out to the walker and says this way friend, we are ready for you. The walker has made it past a barrier on the barn wall. Carol musters all the strength she can, gets loose and kills the walker.

Ezekiel, Eugene and Yumiko and traveling again on horseback, they look ahead and see a big city.
Neegan and Daryl are sitting down sharing a canteen of water. Neegan says he doesn’t think Carol is coming back. Neegan says that when he said he liked it, that was not part of the act. When his people locked him up, he spent seven years looking out that window. When Alpha took him in, he liked it, it was nice feeling like he mattered, like he was respected, but she took it too far, you don’t kill people who don’t deserve it, and you don’t kill kids. Daryl asks if that is supposed to make him like him, he says no, but what about his winning personality.

The three on horseback are in the city. They get off the horses and walk around. They only thing they see are walkers who are staged to look like real people. Ezekiel starts to laugh. All of a sudden a woman appears and she says hi.

Alpha is back inside his room, he is looking at his note again and picks up Alpha’s head. He takes her out of the bag, and thanks her, he tells her that he sees now like her. Then he takes his knife and he stabs her head. He takes her heads and presses her forehead to his. Next, Alpha goes to the front door and walks out of the building. The walkers follow him.