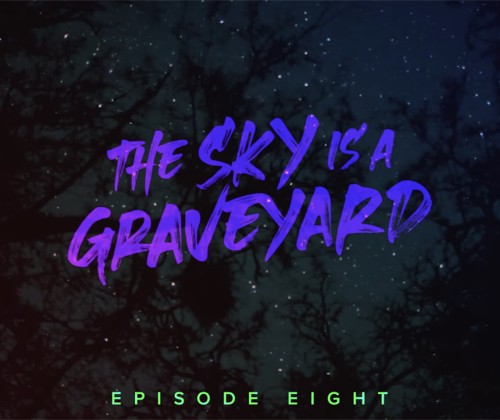 Silas is outside sitting near the swings, he is chained to them, and he claims not to remember anything and Felix believes him. Huck says there is no evidence that anyone else is around. Elton says Silas is their friend and has earned their trust, and it doesn’t make sense that he would attack the people who are helping them.

Silas is sitting there hugging his knees and holding back tears, Huck goes up to him and says she is sorry, grabs his bag, and takes it inside. Huck goes through it and finds drawings, Iris says they are hers.

Silas thinks back to when he was younger and at home, we see a smashed picture frame on the floor and blood on Silas’ hand. His father is on the floor and looks like he has a stab wound. Then we see his father attacking him and choking him, Silas is the one who hurt his father in self-defense.

Hope is concerned, Iris had thrown out the drawings and Silas took them out of the trash. The group is divided about Silas, whether to take him with them or leave him behind. Elton goes to see Silas and he tells him that he doesn’t think he would hurt anyone without just cause. Elton tells him that he doesn’t believe in himself, then he will believe him. He will find proof that it was not his fault, otherwise, the group is going to leave him.

Silas thinks back to his childhood again and we see further abuse by his father. Then we go back to when his father was killed, a neighbor comes to the door, she tells him she heard noises and came to see if they are ok. Silas tells her to leave. Silas closes the door and turns around, his father is gone from the floor. Silas sees blood on a door handle and calls out for his dad. Someone is upstairs, Silas can hear a commotion.

Felix goes to see Silas and asks if he needs anything from them, he says no. Silas asks if Iris is ok, Felix reminds him that one of her friends is dead. Then he says he doesn’t want to be like this, like his dad. Meanwhile, Hope and Huck are digging a grave.

Iris tells Hope that she doesn’t think Silas did anything. Felix comes back with Elton, he found him down by the river, he was following Percy’s trail so they could exonerate Silas, but he didn’t find anything. Elton says that Silas is his family and he deserves their help.

Silas goes up the stairs of his home, he sees his father in one of the rooms, he has turned. He comes after Silas who runs and locks himself in his bedroom. He tries to escape from on one of the windows, but they are locked. We see other flashbacks of Silas and his father. Silas puts his headphones on and listens to his music really loud so he doesn’t have to hear his zombified father at his door.

Silas removes his headphones and goes to listen by his door, he hears his mother come home. His zombified father attacks his mother while Silas screams for her to get out of the house. Silas takes over, he falls to the ground with his father and crushes his head by hitting it on the floor.

Back to the present, Silas is still chained up and an empty is at the fence trying to get through to him. He just sits there, closes his eyes. Hope shows up and takes care of the empty, he asks her why she saved him. She says enough people have died.

Elton and Iris talk, he tells her that she is the closest thing they have to a leader. She heads outside to see Silas. He says he didn’t want her to see him like this, he doesn’t remember much, just being angry, he thinks there is something wrong with him. He says he killed his dad, he killed Percy and Tony, he is a killer and he is sorry she met him, but he is glad that he got to know her and he will never forget her.

He hugs her and tells her that everything happens the way it’s supposed to happen. Then she tells him that she lied to him, she hands over a necklace and tells him that since he forgave Silas, maybe one day he will forgive her too. She tells him about shooting his mom.
Elton looks broken as he heads out to catch up with Silas.

Silas drops his headphones near and empty and continues walking.

We go to Elizabeth, Huck walks in, she is working with her and tells her she only got away for forty-eight hours.