BY hellodrdavis on March 15, 2020 | Comments: 2 comments
Related : Soap Opera, Spoiler, Television, The Young and the Restless 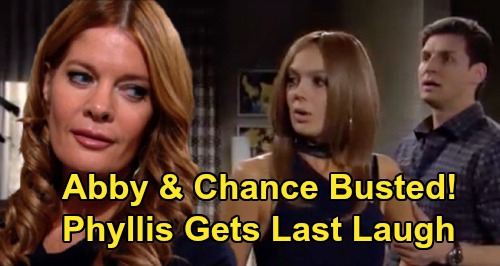 The Young and the Restless spoilers tease that Phyllis Summers (Michelle Stafford) may soon get a big surprise. As Y&R viewers know, she’s been at odds with Abby Newman (Melissa Ordway) and Chance Chancellor (Donny Boaz) for a while now. She and Abby have fought bitterly over the Grand Phoenix, and then there’s the issue of the recording that Phyllis has of Chance and Adam Newman (Mark Grossman) talking in Las Vegas.

Abby was livid when she found out that Phyllis was using the recording as blackmail against Adam and Chance, and she vowed to put a stop to it once and for all. So she and Chance devised a plan to find and destroy Phyllis’ copies of the recording.

They managed to destroy the recordings that Phyllis had in her hotel room, but then Phyllis revealed that she had another copy stashed in a safe deposit box.

And so Abby and Chance headed to the bank with Abby dressed up like Phyllis and wearing a red wig. And by all accounts their mission was a success and they got access to the safe deposit box and got the recording. They were thrilled and celebrated their victory with gusto.

But is that really going to be the end of it? Something about their mission seems off, like it was just too easy. One wonders if this will really be the end of the line for Phyllis’ blackmail scheme.

After all, Phyllis could have yet another recording of the conversation stashed somewhere else. Or worse, the whole safe deposit box thing could have been one big set up.

After all, Phyllis is pretty cunning, and she did seem to deliberately tell Abby about having a copy of the recording in a safe deposit box when she didn’t really have to do that.

She might have known that Abby and Chance would try to gain access to the safe deposit box, and if that’s the case, then Phyllis could have tipped off the bank and/or the cops that a crime was about to occur.

So, Abby and Chance might be operating under a false sense of security right now. But they could wake up one morning and have the cops knock on their door with some questions about exactly where they were when the safe deposit box was fraudulently accessed.

And if the bank knew ahead of time that someone was going to impersonate Phyllis, they may have made sure to get the whole thing on camera.

We’ll see what happens here, but it seems highly likely that Phyllis could have set up Abby and Chance for a big downfall. And if that’s the case, they’re going to have a lot of explaining to do – especially about exactly what they were looking for. Do you think that Phyllis will get the last laugh here?

Stay tuned to the Young and the Restless and consult CDL frequently for the latest Y&R news and information. We’ll keep you informed as we learn more about what’s happening on the CBS soap.