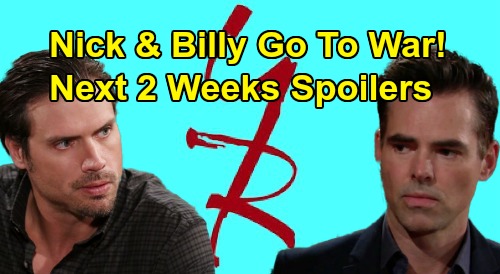 The Young and the Restless (Y&R) spoilers for the next two weeks tease that some twists and turns are brewing in Genoa City. During the week of March 16-20, Theo Vanderway (Tyler Johnson) will cause some trouble. He’ll get a warning from Jack Abbott (Peter Bergman), who may be taking precautions for Dina Mergeron’s (Marla Adams) sake.

Theo will want to do something nice for Dina as the end draws near, so that might be why Jack’s a little on edge. Whatever the case, Theo will face off with Summer Newman (Hunter King) later. She’ll threaten Theo, but that may be more about Lola Rosales (Sasha Calle).

Summer warned Lola that Theo could be a bit of a user, but she admitted Lola brings out a different side of Theo. She wants to be happy for them, but only if Theo can stay in line. That may be why Summer’s putting Theo on notice soon. Despite their issues in the past, Summer truly doesn’t want Lola to face any more pain than she already has.

Speaking of pain, Mariah Copeland (Camryn Grimes) will be in a lot of it after Tessa Porter’s (Cait Fairbanks) rejection. Y&R spoilers say Mariah will deliver a tearful apology and plead for another chance, but Tessa won’t be able to get past Mariah’s betrayal. Mariah will have given up once she talks to Sharon Newman (Sharon Case), but a pep talk from her mom may change her mind.

The Young and the Restless spoilers say Mariah will eventually make another desperate attempt to repair the damage. She’ll track Tessa down on tour and make a bold move to earn forgiveness. It looks like Mariah may have more success his time around. It may be a while before Mariah fully regains Tessa’s trust, but this breakup won’t last too long.

Over with Adam Newman (Mark Grossman), he’ll make a significant discovery about Victor Newman’s (Eric Braeden) past. After running into a childhood friend named Alyssa Montalvo (Maria DiDomenico), Adam will remember Victor being in town when her father – a loan shark named AJ – suddenly died.

Once Adam makes it back from Kansas with Chelsea Lawson (Melissa Claire Egan), he’ll subtly grill Victor and will hopefully figure a few things out. It certainly sounds like Victor may have been involved in AJ’s death. Adam will also stir up Victor’s suspicions with a change of heart, so some important scenes are coming up for the Newman men.

During the week of March 23-27, The Young and the Restless spoilers say Victor will protect a secret, which lines up with all this Alyssa drama that’s going down. Adam seems to have stumbled upon something big here, so it’ll be interesting to see what he does next.

As for Chelsea, she’ll find herself rushing to Adam’s defense soon. Adam will face accusations Chelsea doesn’t approve of, so she’ll be first up to set everyone straight. Of course, there’s a good chance Adam will genuinely be scheming, but that doesn’t mean Chelsea can’t defend her man!

Other Young and the Restless spoilers say Jack will lose his temper. He’ll fly into a rage – perhaps over that Dina situation we mentioned. Kyle Abbott (Michael Mealor) will feel like Dina needs protection from Theo, but whatever move he’s about to make will infuriate Jack. Although Kyle will feel he’s protecting his grandmother, Jack’s ultimately going to side with Theo on this.

Finally, a new war will rev up across town. The Young and the Restless spoilers state that Nick Newman (Joshua Morrow) and Billy Abbott (Jason Thompson) will be at odds. Their feud will get pretty heated, but what will be at the center of the conflict? It could be business, Victoria Newman (Amelia Heinle) or both.

Y&R spoilers say Billy will continue to make updates to his life through his new job at Chancellor Communications. That could mean positive changes and some negative ones, too. It all depends on how cutthroat Billy gets! As other news emerges, don’t forget to check CDL often. We’ll have other exciting Young and the Restless spoilers, news and updates to pass along.