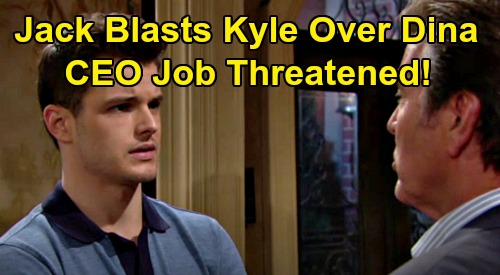 The Young and the Restless (Y&R) spoilers tease that major Dina Mergeron (Marla Adams) drama is coming up. The trouble may start with an idea from Theo Vanderway (Tyler Johnson). Toward the end of the month, Y&R fans can expect Theo to make some sort of gesture for his grandmother. He doesn’t know Dina very well, but he’ll still want to show that he cares.

However, The Young and the Restless has established that Theo and Kyle Abbott’s (Michael Mealor) feud is still going strong. After Kyle spotted Lola Rosales (Sasha Calle) in Theo’s arms after the storm, he clearly wasn’t pleased.

Kyle is adamant that Summer Newman (Hunter King) is the woman for him, but that doesn’t mean he wants to see Lola used or hurt.

After Kyle rejected Theo’s social media campaign ideas, Theo accused him of making this personal. Whether that’s true or not, this battle’s bound to rev up over Dina. The Young and the Restless spoilers say a serious fight will break out after Kyle hurls accusations of his own. He’ll believe Theo is taking advantage of Dina and her suffering.

Kyle will make it clear that Theo needs to back off, but Theo may think Kyle’s the one who needs to do that. Although Kyle will just want to protect Dina, this argument could be upsetting if it goes down in front of her.

Whatever the case, Kyle will be scolded by a livid Jack Abbott (Peter Bergman) before Jack ultimately summons Kyle for an important meeting.

Summer will throw her full support behind Kyle. Summer will agree that Theo was just trying to impress Lola and not really taking Dina’s well-being into account.

Summer will hope that Jack’s cooled down and wants to make peace with Kyle. Unfortunately, Kyle won’t be so sure. He’ll point out that Jack seemed so betrayed in that moment. Could Kyle’s spot as co-CEO be on shaky ground?

Jack only agreed to this as a trial run, so this betrayal could be a real problem. Will Kyle be demoted or even kicked out of Jabot? Anything’s possible if Jack’s angry enough! Kyle could be handing Theo the ammo he needs, so we’ll see what he might do in the aftermath.