The Young and the Restless Spoilers: Adam Guilty of AJ Murder, Wrong About Victor’s Cover-Up Motive – Tried To Protect Son?

BY Heather Hughes on April 4, 2020 | Comments: one comment
Related : Soap Opera, Spoiler, Television, The Young and the Restless 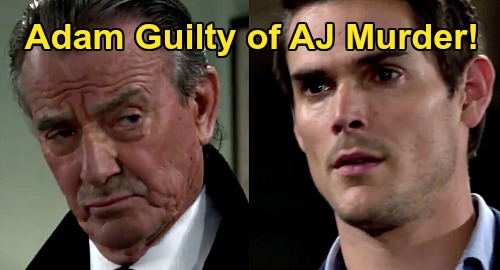 The Young and the Restless (Y&R) spoilers tease that Adam Newman’s (Mark Grossman) blackmail scheme will come with crushing consequences. Of course, Adam will score a win before his devastating defeat. Y&R has to put all the pieces in place before they let Adam fall hard.

Victoria Newman (Amelia Heinle) will be appalled over Adam’s proof that Victor Newman (Eric Braeden) murdered AJ Montalvo and covered it up. Although Victoria won’t want to believe it, Adam will make a case for why it’s true. He’ll insist this is who their father is.

Adam will suggest Victor could’ve gotten out his checkbook or bought a dozen farms to help with the debt. The fact that Victor chose to murder AJ will be significant in Adam’s opinion. Adam will think Victoria needs to open her eyes to Victor’s ruthless tactics.

Since Adam’s coming for Victor so strongly on these murder accusations, we have to wonder if things are really as they seem. The Young and the Restless has only offered proof that Victor covered up the crime – not that he was actually to blame. Adam’s just assuming that because Victor brushed it all under the rug, he must be responsible.

However, what if Victor was protecting someone else? Could Adam have killed AJ when he was younger, either accidentally or in a fit of rage? It’d be a painful memory that Adam might’ve blocked out. Victor may have covered it up to protect Adam and shield Hope from that sorrow, too.

In the April 6 episode, Victoria lets Victor know she’s behind him on whatever he wants to do next. Victor ultimately informs Victoria that he has something to tell her. After an offscreen confession, Victor hands Adam Newman Enterprises as Victoria stands behind him looking uneasy.

Victoria’s kids have been through a lot lately due to her own trauma. The Connor angle might tug at Victoria’s heartstrings enough to keep her mouth shut. In Y&R’s weekly promo, Nikki Newman (Melody Thomas Scott) also flips out over Adam’s blackmail scheme.

Nikki confronts Victor and doesn’t get why Victor’s just surrendering to Adam’s demands like this. Nikki then asks what Victor isn’t telling her.

Could Victor’s secret be that he’s protected Adam all this time? That brings us back to Adam’s crushing consequences. Victor may be pushed to his breaking point and eventually reveal that Adam’s the murderer here, not him.

The Young and the Restless spoilers say Victor will resort to desperate measures to keep Adam away from Newman Enterprises. This temporary takeover isn’t going to last long.

Once Victor gives an ultimatum that Adam will most likely ignore, Victor may consider dropping his murder bomb. Adam’s devastation could come from learning he killed his childhood best friend’s dad!

Regardless, Victor hasn’t provided the full picture yet. After it all comes into focus, Adam will be the one who gets burned in the end. We’ll keep you posted as other Y&R updates emerge. Do you think Adam’s guilty? Was Victor’s cover-up about protecting Adam instead? Stick with CDL for other hot Young and the Restless spoilers, updates and news.