The Young and the Restless Spoilers: Adam’s Paternity Shocker – Not a Newman, Says Victor – Twisted Scheme to Stop Son? 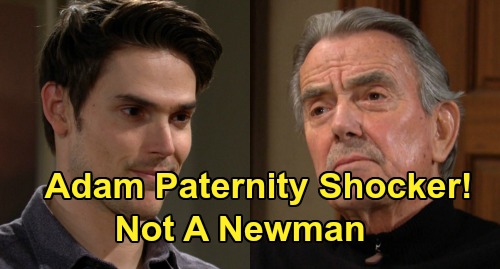 Whether Adam’s theory is right or not, this is something Adam feels like he has to pursue. Let’s consider some dialogue from the March 27 episode and try to figure out where this hot plot’s headed next.

Adam contemplates if he should go down this risky road, but he ultimately decides it’s the right call. He tells Chelsea Lawson (Melissa Claire Egan) that he has to prove he’s cut from the same cloth as Victor.

Adam adds that he wants to prove he’s more of his father’s child than Nick Newman (Joshua Morrow), Victoria Newman (Amelia Heinle) or Abby Newman (Melissa Ordway) could ever be.

During the week of March 30-April 3, Adam will repeat this idea to Victor when he presents evidence and blackmails him. Adam will threaten to go public with the proof unless Victor gives him everything he wants.

Victor will hear all about how Adam is just like him – always scheming and willing to be as ruthless as necessary. Y&R’s really driving this point home. “Like father, like son” seems to be the theme with this storyline.

Now let’s mull over some intriguing spring preview info. The Young and the Restless spoilers say Adam’s plot will backfire in a way he never expected. It’ll blow up in his face with crushing consequences, so Adam will need Chelsea to help him cope. As for Victor, he’ll take drastic action to make sure Newman Enterprises and his family are protected.

So now we should put all these puzzle pieces together. We’ve got Adam going on and on about how he’s most Newman-ish Newman – the child who’s truly like his father. We know the plan will flop and Chelsea will have to help suffering Adam.

We also know Victor will take steps to keep the Newmans safe from Adam and his twisted web. Doesn’t it sound like Victor will make it look like Adam isn’t a Newman at all?

It’s doubtful Y&R would really change Adam’s paternity. That would unleash the fury of fans like never before! However, they might make it seem like Adam isn’t a Newman for a while – much like they did when Jack Abbott (Peter Bergman) thought he wasn’t truly an Abbott.

Since Adam feels like such a black sheep, Victor may decide to shove him out of the family entirely. He could present some bogus story that leads Adam to the conclusion that Victor isn’t actually his dad.

Adam’s already been contemplating what his life would’ve been like if he’d never known Victor was his father. Maybe Adam will face an identity crisis soon enough! The Young and the Restless spoilers say this storyline will bring some surprises, so we’ll pass along updates as other Y&R news rolls in.

Do you think Victor will manipulate Adam into thinking he’s not a Newman? Will Adam believe Victor isn’t his father after all? Don’t forget to drop by CDL frequently. There’ll be plenty more Young and the Restless spoilers, updates and news posts to pass along.