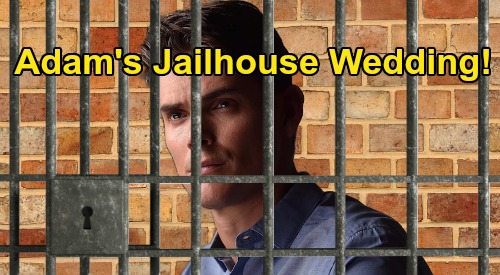 The Young and the Restless (Y&R) spoilers tease that Adam Newman (Mark Grossman) may be on top of the world right now, but he’ll soon sink to rock bottom. Y&R fans know Adam took drastic action to show Victor Newman (Eric Braeden) they’re just alike. Since Victor wasn’t willing to give Adam the CEO seat at Newman Enterprises, Adam came up with a blackmail plot and simply took what he wanted.

Of course, Adam’s about to find out things aren’t always as they seem! Victor denies killing AJ Montalvo, and we believe him. There has to be another side to this story – one that’ll make Adam regret ever digging for dirt!

It’s possible Adam himself was to blame for AJ’s death before he blocked out the memory. It’s also possible Hope Wilson (last played by Beth Toussaint) was somehow responsible, which would’ve given Victor another cover-up motive. Regardless, Victor’s hands seem to be clean any way you slice it.

The Young and the Restless spoilers say Adam’s scheme will lead to devastating consequences. Even if Adam doesn’t face charges in AJ’s demise, there’s another man’s death to consider. The situation in Vegas could still come back to haunt Adam since he can’t prove it wasn’t murder.

Adam’s gone to great lengths to cover up the Sin City mess, but will Victor turn the tables and expose everything? Victor has mentioned knowing about Adam and Chance Chancellor’s (Donny Boaz) connection, so he may have evidence ready and waiting. If Adam pushes Victor too far, Victor might have his son arrested.

What happens if Adam finds himself sitting in a jail cell? How would Chelsea Lawson (Melissa Claire Egan) react to that news? No matter how this plays out, The Young and the Restless spoilers say Chelsea will continue to give Adam her full support.

Chelsea will be there for Adam and give him the strength he needs to carry on. Since Adam could land behind bars, will Y&R writers go for a jailhouse wedding?

We can’t forget that Adam and Chelsea still haven’t tied the knot. Perhaps Chelsea will marry Adam while he’s in lockup as a sign of faith – both in Adam and in their future together. Chelsea may want to give Adam a reason to keep fighting for his freedom.

Whatever the case, it’s good that Adam will have Chelsea to get him through the tough times ahead! As other Y&R updates become available, we’ll deliver all the latest details.

Do you think Adam’s arrest will force a change of wedding venue? Will Chelsea marry Adam while he’s in jail? CDL’s your go-to source for entertaining Young and the Restless spoilers, updates and news.