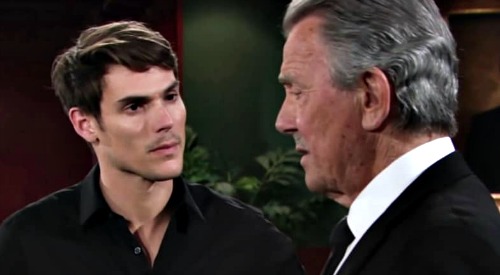 The Young and the Restless spoilers document that Victor Newman (Eric Braeden) will be infuriated by Billy Abbott’s (Jason Thompson) tactical smear efforts. The intended smash drives the Moustache to defend his troubled son once again.

Alyssa Montalvo (Maria DiDomenico) believes that she has enough evidence to expose Adam Newman’s (Mark Grossman) actions. Billy, like Alyssa, is propelled by a gotcha attitude where both Newman men are concerned.

Together they think there’s enough dirt to bury the men who’ve damaged their loved ones and the lives of countless others.

Young And The Restless Spoilers – Billy Abbott Given Intel Or Bait?

Billy was totally receptive to Victoria Newman’s (Amelia Heinle) intel offer. Some might choose to see her information pass as self-serving and it partially was. But it can be argued that she’s trying to help Billy right a perceived wrong.

The intel referenced was passed to Alyssa, who used it to further pursue a lead. Her apparent success in securing evidence is enough to allow Billy to go to digital print with his slam story against Adam.

Adam attacks when he feels threatened. As part of this response he sent Alyssa on a diversion out west. Her goose chase merely delayed matters.

Adam knows that his crime wasn’t killing the man who Chance Chancellor (Donny Boaz) was investigating. Instead, both men’s decision to coverup what happened has long remained the problem.

The dead man’s widow has been asking increasing questions in recent months. Alyssa’s contact with her created a deep dilemma that likely plays into the referenced story that’s published. Billy and Alyssa are using that lady’s desire for justice in order to further their hit piece on Adam.

Victor never cared for Billy. He still feels that Thompson’s character wasn’t good enough for his first-born daughter and, as Villy proved on a number of occasions, may not have been.

Billy’s status as the father of two of Victor’s grandchildren doesn’t make him family. The head of the Newman’s sees Billy’s attempt to publicly expose Adam as an assault on the entire clan.

It’s possible that one of the outcomes of this major battle will be that Adam realizes he shouldn’t be fighting his father. Victor isn’t his enemy, now. In this instance Billy and Alyssa hold that status, as their actions undeniably demonstrate.