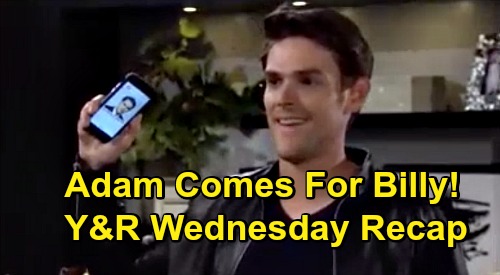 The Young and the Restless spoilers recap for Thursday, October 1, tease that Lily Winters (Christel Khalil) will fume at Billy Abbott (Jason Thompson) for publishing the story about Adam Newman (Mark Grossman).

Billy and Lily will proceed to argue about how Billy’s thirst for payback could ruin everything they’ve built at Chancellor Communications. Lily won’t even be able to look at Billy, and she’ll leave the office in a huff.

Later, Amanda Sinclair (Mishael Morgan) will corner Billy in the office, asking him if he’s crazy. Amanda will think that maybe she should quit, but Billy will maintain that he made the smart move.

Amanda will say that she can tie Victor Newman (Eric Braeden) and Adam up in court, but that Billy needs to think about whether using the company for his personal vendetta is something to be proud of.

At the Newman Ranch, Nikki Newman (Melody Thomas Scott) will talk with Victoria Newman (Amelia Heine) via phone, asking her if she’s proud of herself.

Victor will walk in the room and learn that the story has been published. Later, Nikki and Victor will do damage control on their phones, and Nikki will urge Victor to calm down, but Victor will be irate at Billy and Victoria.

As Nikki and Victor are talking, Rey Rosales (Jordi Vilasuso) will walk in and talk with Victor privately. Rey will say that the local Kansas authorities have asked for the GCPD’s cooperation, and that he has some questions about what happened in Kansas, noting that there is no statute of limitations on murder.

Victor will bluster, saying that Billy should be arrested for libel.

Victor will insist that he played no part in the Kansas incident, and Rey will disclose that George the farm caretaker has gone missing. Victor will refuse to answer any questions, and he’ll tell Rey to talk with his lawyer before walking out of the room.

At Adam’s penthouse, he and Chelsea Lawson (Melissa Claire Egan) will field calls from news outlets wanting comments on the article. Adam will say that he’s going to kill Billy, but Chelsea will say that they need to deal with Connor Newman (Judah Mackey).

After a call to the boarding school, Adam and Chelsea will learn that Connor’s access to the internet is restricted, so he’s safe for now. Chelsea will want Adam to stay, but Adam will be irate, and he’ll take off to face down Billy.

At the Grand Phoenix, Phyllis Summers (Michelle Stafford) and Nick Newman (Joshua Morrow) will talk about the story that they’re reading on their phones.

Suddenly, Nick will read something, and he’ll hightail it out of there, saying that he’s got to get to Faith Newman (Alyvia Alyn Lind) fast. Phyllis will keep reading, saying to herself that Billy has gone too far.

Phyllis will then call someone about her tax payment that’s due at the beginning of the year, and the person on the other end will tell her that the taxes are due this quarter. Phyllis will be horrified, and she’ll say that this is a huge problem, and that she can’t make the payment.

At Sharon Newman’s (Sharon Case) house, Nick will show up just after Faith has seen the story about Adam. Nick and Sharon will approach Faith saying that a story came out and that part of it was about what happened to Faith when she was a baby.

Faith said that she knew that Adam kidnapped her and passed her off as Ashley Abbott’s (Eileen Davidson) child, but that she didn’t know details until now.

Faith won’t want to talk about the story anymore, and she’ll try to convince her parents that she’s fine. But when Faith steps out of the room, she’ll start to get bullying texts about the story taunting her about being kidnapped when she was a baby.

Faith will say that she’s heading out to study with a friend, and as she goes, she’ll get another bullying text.

Back at the Grand Phoenix, Nick will return to Phyllis’ suite, and he’ll update Phyllis on how things went with Faith. Nick will lament that this shouldn’t have had to happen on the night before Sharon’s surgery.

Phyllis and Nick will be upset with Billy for putting stuff about Faith in the article, and Nick will think that at this point, Adam may feel like he has nothing left to lose.

At Newman Enterprises, Nikki will come into Victoria’s office raging about the article. Nikki will blast her daughter for driving a wedge in the family – just like Adam wanted. Victoria will defend herself, but she’ll be clearly rattled, and after Nikki storms out, Victoria will ignore a call from Victor.

Victoria will be upset that Victor comes across terribly in the article, and Billy will say that’s because Victor has done horrible things. Victoria will wonder how much worse it’s going to get from there.

Back at Chancellor Communications, Amanda will tell Lily that they’ve been served to retract the story, and Lily will report that the advertisers are scared. Later, Billy will return and talk with Lily, who will say that she got the metrics back for the story and that they are phenomenal.

Billy will take a look, and he’ll be pleased. Lily will be pleased as well, but still she’ll caution Billy not to go rogue again – after all, she’s a full partner, too.

Lily will step out, and Adam will rush in all upset as Billy grins big. “Well, don’t you look happy, Billy,” Adam will say. “Well, let me change that for you.”

Back at the Newman Ranch, Nikki will return looking for Victor, who will be nowhere to be found. At Newman Enterprises, Victoria will return to find Victor sitting in her CEO chair.

“Since you’ve been avoiding my calls, I thought I’d come here and say what I have to say in person,” Victor will say, as Victoria looks nervous.

It sounds like a lot of Y&R drama is heating up for Thursday’s episode, so stay tuned! We’ll give you updates as Y&R news comes in. Stick with the CBS soap and don’t forget to check CDL frequently for the latest Young and the Restless spoilers, updates, and news.