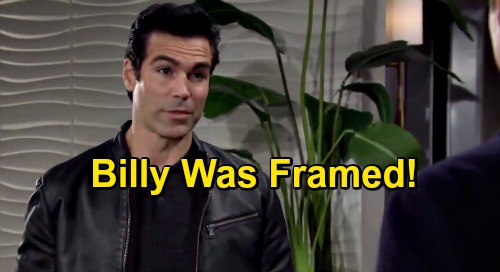 The Young and the Restless spoilers tease that Rey Rosales (Jordi Vilasuso) and Paul Williams (Doug Davidson) are on the hunt for the person who shot Chance Chancellor (Donny Boaz).

The whole situation is pretty upsetting – Rey and Paul nearly lost a valued member of their team when Chance took a bullet that was meant for Adam Newman (Mark Grossman). The search is now on for a shooter with a motive for wanting Adam dead.

Well, recently, Rey and Paul made a discovery in Billy Abbott’s (Jason Thompson) office at Chancellor Communications – they found a single blue earbud. This came after Paul announced just a while earlier that a single blue earbud had been found at the scene of the shooting.

This seemed pretty incriminating against Billy in the moment, but Billy’s reaction was pretty nonchalant, and he didn’t seem rattled at all to find that one of his earbuds was missing.

If Billy were the culprit, then he’d probably have had a bigger reaction to having lost an earbud in recent days. But the earbud won’t be the only thing that points Rey and Paul in Billy’s direction.

According to The Young and the Restless spoilers for the week of November 23, Rey will march into Billy’s office and announce that the ballistics from the bullet pulled out of Chance’s body matches the bullets from Billy’s gun.

Something tells us that this is just all too convenient, and we suspect that Rey and Paul will realize that something feels too easy about all of this.

First of all, Billy’s a careful, calculating person, and it will just seem odd that he’d just drop an earbud at the crime scene and that he’d choose to use his own gun to commit this crime. Something’s off here.

In fact, Rey will probably quickly realize that this has all the hallmarks of a big setup. The question in the investigation might turn from looking at Billy as a suspect to searching for the person who’s obviously setting Billy up to take the fall for his or her crime.

Billy’s a perfect fall guy since he published that exposé on Adam – and he’d be a perfect target for the real shooter to frame.

We’ll see how long it takes for Rey to realize what he’s really dealing with here, but someone seems to be going to great lengths to frame Billy.

And that’s going to make Rey’s job more interesting – now he’s got to ask himself who would have motive to try to shoot Adam AND want to put Billy away for the crime.

Whoever it was turned out to be very careful and deliberate, and they knew exactly what they were doing.

At any rate, it looks like there’s going to be a big mystery for Rey to solve. Who do you think is framing Billy for trying to shoot Adam? Stay tuned to the CBS soap and don’t forget to check CDL as often as you can for the latest Young and the Restless spoilers, updates, and news.