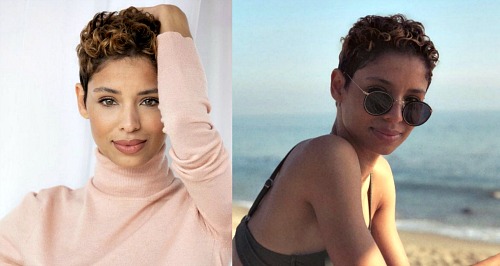 The Young and the Restless spoilers has some news to pass on about a popular Y&R star. Brytni Sarpy, who portrays Elena Dawson not the CBS soap, recently appeared on-screen with a brand- new look. Brytni, whose hair was shoulder-length before, is now rocking a new short ‘do, and fans are loving it.

Brytni posted a photo of herself and her new haircut a while back on Instagram, and the response has been overwhelming. One of Brytni’s followers commented, “Stunner! This cut looks so good on you! You can definitely rock both short and long hair.”

And someone else said, “Love your hair! Giving total Halle Berry vibes.” Finally, someone wrote, “I’m loving your hair so much Brytni!! Simply Beautiful!!”

Now that viewers have seen Brytni on-screen as Elena with the shorter hair, we can’t help but wonder what the change signifies for the character. Often, when characters undergo dramatic physical transformations on-screen, it’s in the midst of a change or shift for the character.

And as Y&R viewers know, Elena has certainly been undergoing some major changes lately.

Right now, Elena is in quite a predicament; she desperately wants Devon Hamilton (Bryton James) back, but she’s also realized that she does have feelings for Nate Hastings (Sean Dominic).

Elena seems to be getting to the point where she’s realizing that she’s really burnt a bridge with Devon and that there’s no going back, and she’s open to the possibility of dating Nate.

In fact, Elena even told Nate that she’d be willing to go on a date with him if he asked. Nate hasn’t asked yet, but we suspect that Elena and Nate will head out soon to explore what’s between them.

It may take Elena a while to get over her high hopes about reconciling with Devon, and we wouldn’t be surprised if Elena and Nate actually run into Devon on their first date…perhaps when he’s with Amanda Sinclair (Mishael Morgan).

It will be interesting to see what happens, and if Elena’s new haircut signals a big change for the character. Whatever the case, we’re loving the new cut on Elena and on Brytni, and we can’t wait to see where Elena’s storyline leads!

Stay tuned to the CBS soap and remember to keep CDL bookmarked for all the latest Young and the Restless spoilers, updates, and news. We’ve got you covered!