The Young and the Restless Spoilers: Camryn Grimes Reveals She’s Bisexual – Would Love to Be The CW’s New Batwoman

BY Kinsley Goldman on May 23, 2020 | Comments: Leave Comments
Related : Hot News, Soap Opera, Spoiler, Television, The Young and the Restless 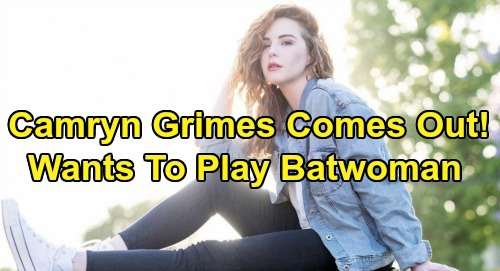 The Young and the Restless (Y&R) spoilers tease that Camryn Grimes (Mariah Copeland) recently revealed a new part she’d loved to play and came out as a bisexual in the process. On Twitter, Grimes sent a tweet nominating herself to portray the titular role of The CW’s Batwoman. The Y&R star is a huge comic book fan and would jump at the chance to play this beloved character.

If you haven’t heard about Batwoman’s latest casting dilemma, we’ll fill you in. Ruby Rose was successful as the lead of the show, but it was announced that she wouldn’t be back for another season. Multiple sources told Variety that Rose wasn’t happy about the long hours the role demanded, so there was some conflict on set.

Now The CW is in need of a new Batwoman, but they have a specific requirement in mind. Since Batwoman aka Kate Kane is an out lesbian, the network wants their new actress to be a member of the LGBTQ community. When someone pointed that out to Grimes on Twitter, she explained that she’s indeed a member of that community.

“I’m bisexual,” Grimes said. She later replied to another tweet and offered a follow-up explanation. “Definitely not, my bf is bisexual and it was during conversations with him that it just clicked,” Grimes said. “Honestly feel stupid I didn’t come to the conclusion sooner lol.”

When someone wondered if Grimes just came out, The Young and the Restless actress confirmed it. “Yea, pretty sure I did. Lol,” Grimes tweeted. Another Twitter user praised Grimes for being so casual about the whole thing, and she had a great response for that. “I also like rock climbing, manatees and carbonara,” Grimes said.

Grimes has already been a proud and vocal supporter of the LGBTQ community, which she represents in her role as Mariah on Y&R. The Young and the Restless has told a sweet story of authenticity and connection through Mariah and Tessa’s ever-growing love in Genoa City.

Y&R’s only same-sex couple seems to be on the verge of getting married down the road, so that would definitely be quite a milestone for “Teriah” and a huge deal for the CBS soap. Let’s hope Mariah and Tessa get the wedding of their dreams at some point.

As for Grimes, we obviously want her to keep playing Mariah in GC. That said, Grimes would knock the role of Batwoman out of the park if given the opportunity. She’s one of the best in the biz!