The Young and the Restless Spoilers: Cassie Returns to Support Sharon – Mom Reunites with Dead Daughter’s Spirit for Cancer Fight

BY Heather Hughes on January 31, 2020 | Comments: one comment
Related : Soap Opera, Spoiler, Television, The Young and the Restless 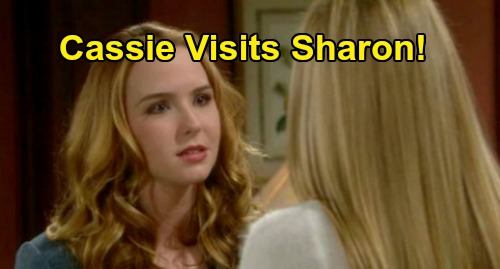 The Young and the Restless (Y&R) spoilers tease that Sharon Newman (Sharon Case) will be uneasy as she prepares for the next step. Sharon’s been struggling to wrap her head around this cancer diagnosis and what it means for her. She sometimes feels lost and alone, but other times she feels smothered and pitied. Sharon’s just an emotional wreck and can’t seem to find her footing again.

Fortunately, Sharon will get some help from a familiar face. Y&R fans know Cassie Newman died back in 2005, but she’s popped up in dreams and hallucinations since then.

Of course, there was also Mariah Copeland’s (Camryn Grimes) entrance to Genoa City, which involved pretending to be her dead twin’s ghost. To be fair, Mariah didn’t know she was Cassie’s sister or Sharon’s daughter at the time!

Sharon will drift off to sleep in an upcoming episode and awaken to a surprise visitor. She’ll assume Mariah’s dropped by to check on her, but she’ll soon learn it’s her deceased daughter who’s popped in.

The Young and the Restless spoilers say Sharon will be taken aback to learn Cassie’s spirit is there, but she won’t be scared or rattled. Instead, Cassie’s presence will be quite comforting during this cancer crisis.

Sharon will get the feeling that Cassie genuinely thought her mom could use a visit. She’ll appreciate the chance to catch up and get some guidance before she starts chemotherapy.

Sharon realizes is a necessary part of her treatment, but it’s still something she’s dreading. She won’t be able to predict how weak or ill she’ll feel afterward, so walking into the unknown like this is tough.

Thankfully, Cassie will give Sharon all her love and support. She’ll know exactly what to say and will undoubtedly deliver plenty of encouragement. The Young and the Restless spoilers state that Cassie will eventually have to leave, but her visit should give Sharon the strength she needs to press on. Once Sharon begins chemo, she’ll prove she’s a fighter!

It sounds like some heartfelt scenes are coming up. Are you excited to see Camryn Grimes reprise the role of Cassie Newman? We’ll give you updates as other Y&R news emerges. Stay tuned to the CBS soap and don’t forget to check CDL often for the latest Young and the Restless spoilers, updates and news.