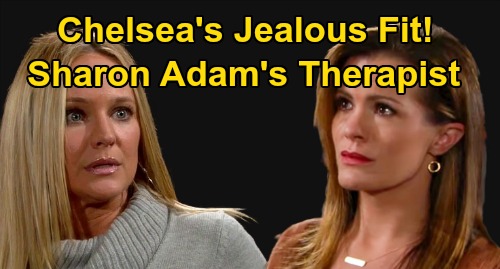 The Young and the Restless (Y&R) spoilers tease that Chelsea Lawson (Melissa Claire Egan) will soon have a reason to get riled. After Adam Newman (Mark Grossman) brings Sharon Newman (Sharon Case) up to speed on Victor Newman’s (Eric Braeden) story about AJ Montalvo, Adam will push Sharon to help him dig for the truth.

Of course, that truth can only come from Adam’s own mind. Adam needs to access the memories he blocked out, so he’ll hope Sharon can pitch in on this. If those memories are indeed there as Victor claims, Adam won’t want them to stay buried.

Y&R spoilers say Adam will convince Sharon to be his therapist – but only on one condition.

Sharon won’t feel right about taking on this role for Adam without Chelsea’s blessing. After all, it’s a bit weird for Adam’s therapist to be his former flame! The project Adam’s tackling with Sharon will involve opening up and getting plenty of advice.

It’s a very personal situation, so it’s easy to see why Sharon would have concerns under the circumstances.

Adam will agree to fill Chelsea in on what Sharon wants, which is basically just Chelsea’s approval. If Chelsea says it’s OK, Sharon will be willing to proceed.

However, Chelsea won’t appreciate the way Sharon’s handling this. It seems Chelsea will feel like all the pressure’s on her; Chelsea will be the “bad guy” if she says no.

Naturally, Chelsea will also worry about what Sharon might help Adam uncover. If Adam remembers killing AJ, that’s sure to be devastating. Chelsea may think Sharon should’ve just turned Adam away, so she’ll have a bone to pick with her soon.

The Young and the Restless spoilers say Chelsea and Sharon will have a dangerous showdown during the week of August 24-28.

A serious fight will break out, which can’t be good for Sharon – who’s battling breast cancer and just had surgery. Sharon’s awfully weak, so there’s always the possibility that she’ll collapse from the stress of it all!

We’ll provide updates as other Y&R news rolls in. The Young and the Restless spoilers say Sharon and Chelsea’s fierce faceoff will bring some shocking moments, so stay tuned.

CDL will have lots of other terrific Young and the Restless spoilers, updates and news to catch up on, so be sure to stick with us for all the latest info.