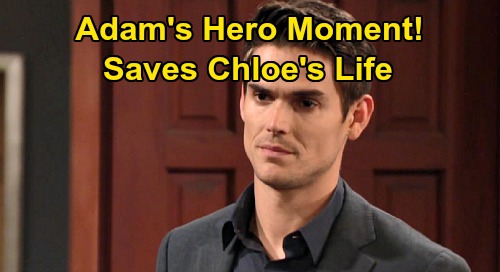 The Young and the Restless (Y&R) spoilers reveal that Chloe Mitchell (Elizabeth Hendrickson) will remain wary of Adam Newman (Mark Grossman). She’s already called Adam a sociopath and in an upcoming episode, Chloe suggests Adam should stop trying to pretend he’s human. It’s clear that although Chloe’s not as unhinged as she used to be, she still hates Adam’s guts.

In that same upcoming episode, Chloe also admits she was the one who shoved Adam out of Billy Abbott’s (Jason Thompson) path. It’s true that Billy probably would’ve killed Adam if it hadn’t been for Chloe. That’s why Chloe lets Adam know he owes her now – which honestly seems crazy for her to say.

Are we just going to act like Chloe didn’t run Adam down herself back in 2015? What about when Chloe conspired with Victor Newman (Eric Braeden) to frame Adam for a murder he didn’t commit?

Or when Chloe blew up the cabin Adam was staying at and cost him years with his family? What about when Chloe returned to town just last year and pumped a bullet in Adam at the tack house?

The Young and the Restless fans know Chloe’s battled grief-related issues, but Adam didn’t murder her daughter. Delia Abbott’s (Sophie Pollono) death was an accident – one that Adam was very distraught over and is haunted by to this day.

It’s not like Adam went out one night and decided to kill a kid. Both Chloe and Billy could stand to acknowledge that.

For Chloe to act like Adam owes her now is a bit uncalled for. If anything, Chloe’s still a few IOUs in the hole! The least Chloe could do was save Adam from Billy’s speeding car. Nevertheless, Y&R’s perpetuating this idea that Adam’s indebted to Chloe – and that could be significant.

Since Chloe claims Adam owes her, is that a hint that Adam will indeed return the favor? Chelsea Lawson (Melissa Claire Egan) told Adam that she couldn’t lose him again. She just doesn’t think her heart could take that.

It felt like the kind of writing that would set up another brush with death for Adam – perhaps after he leaps into action to save Chloe.

There are plenty of ways for that to happen, especially since Chloe works at the Grand Phoenix. It’s practically the epicenter of danger in Genoa City. In fact, there have been several clues about another incident happening there – like Connor Newman’s (Judah Mackey) recent fears and 2020 preview info about hotel drama erupting.

Whatever the case, it’d be nice if Chloe could finally put her grudge against Adam to rest and stop with all this “you owe me” business! Adam doesn’t owe Chloe a darn thing, but he may repay her by saving her life anyway.