The Young and the Restless Spoilers: Kyle’s Summer & Lola Flip-Flopping – Y&R’s Version of The Bold and the Beautiful’s Liam, Hope & Steffy Triangle? 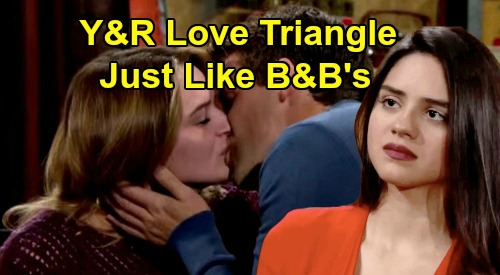 The Young and the Restless (Y&R) spoilers tease that Summer Newman (Hunter King) will get what she wants, but for how long? Y&R viewers can expect a steamy kiss between Summer and Kyle Abbott (Michael Mealor), but where will things go from there? Even if Kyle and Summer hook up, that doesn’t guarantee Summer will have the happy future with Kyle she’s yearning for.

If you’re a fan of The Bold and the Beautiful as well, you know that Liam Spencer (Scott Clifton) has a habit of bouncing between two particular women. Liam tends to get back together with Steffy Forrester (Jacqueline MacInnes Wood) only for things to fall apart. He then ends up back with Hope Logan (Annika Noelle) again before the process starts over.

The Young and the Restless may be creating a similar triangle here. Kyle could become the flip-flopper who can’t stick to his choice. Y&R has always played up the angle of how much Lola Abbott’s (Sasha Calle) love affected Kyle. It’s a point they’ve consistently brought up.

We’d say Kyle was already a pretty nice guy before he ever met Lola, but for whatever reason the show acts like Lola “changed” him. Of course, Kyle’s now drawn to his familiar, comfortable bond with Summer. He can connect with Summer in ways that he can’t with Lola – just like Lola can connect in certain ways with Theo Vanderway (Tyler Johnson). It’s about shared backgrounds and perspectives.

However, The Young and the Restless has been taking Theo back in an obnoxious direction lately. It’s one thing to connect with somebody over how they grew up, but that may not be enough to sustain a long-term love story. Even if Lola and Theo get paired up for a while, there’s no guarantee they’ll last either. Theo is manipulative, dangerous and everything Lola shouldn’t want.

The Young and the Restless spoilers say Kyle and Lola’s marriage may be on the verge of destruction, but that may be a good thing – even for “Kola” fans. Lola and Kyle got married way too quickly. They weren’t ready for that level of commitment, so they should really take a step back and perhaps start over again at a slower pace.

Naturally, Kyle could start building a life with Summer for a while, but how long will it be until he drifts back toward Lola? If Y&R wants a long-term triangle like B&B has with Hope, Liam and Steffy, they could probably have it with Lola, Kyle and Summer.

That could provide plenty of drama, but it may also mean Summer’s destined for more heartbreak. This apparent “Skyle” reunion may be short-lived or at least more difficult than she realizes.

Do you see a similarity between The Bold and the Beautiful’s Steffy, Hope and Liam love triangle and the Y&R triangle between Summer, Lola and Kyle? We’ll give you updates as other Y&R news comes in. Stay tuned to the CBS soap and don’t forget to check CDL often for the latest The Young and The Restless spoilers, updates and news.