The Young and the Restless Spoilers: Daniel Goddard Becomes US Citizen, Coronavirus Postpones Ceremony – Will Cain Ashby Return To Y&R? 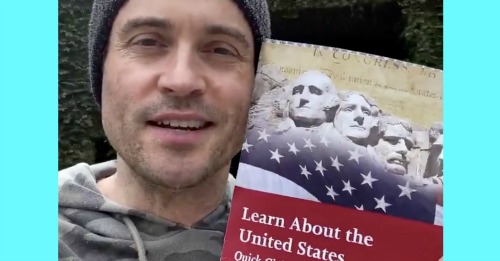 The Young and the Restless spoilers has some great news to pass on about a former Y&R star and his plans to become a United States citizen. Daniel Goddard, who portrayed Cane Ashby on Y&R, recently shared with his Twitter followers that his swearing in ceremony had been postponed due to the coronavirus COVID-19 pandemic.

Of course, the coronavirus situation has resulted in mass closures and limits on the size of public gatherings around the world. It seems that Daniel won’t be able to officially become a United States citizen until the crisis is over and things get back to some normalcy.

Daniel posted a short video of himself on Twitter, along with the following message: “Tomorrow was supposed to be my swearing in ceremony to finally become a US Citizen but now it has been postponed. Nevertheless, when I wake…I will still feel like an American! #GodBlessYou #GodBlessAmerica stay safe & love each other, because we are all in this together!”

In his video, Daniel holds a copy of his study manual for his naturalization test and says: “I’m about to go and sit for my American citizenship test to get my citizenship. I am so proud. I love this country, and I am honored to become a citizen. God bless everybody.”

Daniel has received a lot of well-wishes and replies to his tweet and video. Eric Braeden (Victor Newman, Y&R) replied: “Congratulations, brother! We miss you on the set!!!” And another follower of Daniel’s said: “Aww that sucks, but at least you know you will be able to become an American citizen when this virus dies down. Hopefully soon. Stay safe and God Bless.”

And someone else wrote the following, clearly hopefully that Daniel might come back to Y&R: “Just a delay, you got this. BTW if Lily is back on Y&R, maybe you will return.” Of course, that fan is referring to Lily Winters (Christel Khalil), who is the Y&R character who was most recently married to Daniel’s character Cain Ashby.

As Y&R viewers know, Lily is currently back on canvas and being paired (at least in a work sense) with Billy Abbott (Jason Thompson) for the time being. The two are working together at Chancellor Industries under the direction of Jill Abbott (Jess Walton). But there are plenty of Cain fans who’d like to see him back on canvas and reuniting with Lily.

Last viewers saw Cain, he was off on a mission to track down Colin Atkinson (Tristan Rogers) and see to it that Devon Hamilton’s (Bryton James) fortune was returned. But even though Devon’s money has now been returned, there’s been no mention of Cain or his whereabouts on the show.

At any rate, we congratulate Daniel on his achievement, and we hope that his swearing in ceremony will be able to take place in the near future. Be sure to keep watching the CBS soap and remember to check back with us regularly for spoilers, updates, and news about the Young and the Restless.

Tomorrow was supposed to be my swearing in ceremony to finally become a US Citizen but now it has been postponed. Never the less when I wake… I will still feel like an American! #GodBlessYou #GodBlessAmerica stay safe & love each other, because we are all in this together! ❤️ pic.twitter.com/QQaRP2AXvn