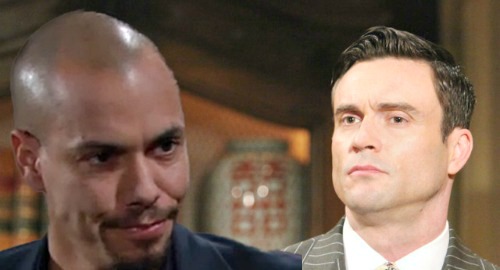 The Young and the Restless (Y&R) spoilers tease that Devon Hamilton (Bryton James) will find himself in a difficult situation. Y&R fans know that Devon recently had a conversation with Lily Winters (Christel Khalil) about Cane Ashby (Daniel Goddard). Lily could sense that Devon was hesitant to say much, so she assumed Devon still believed Cane was guilty.

They also discussed what might happen if Cane was indeed part of the will scam. Cane insisted he was innocent, but we can’t ignore the obvious here. He was written out of the show! There’s really no need to preserve Cane’s innocence if he’s gone.

Furthermore, it seems significant that Devon still suspects Cane after all this time. Y&R could’ve easily thrown in some proof to clear Cane if they’d wanted to. As it stands, there’s no hard evidence that confirms things either way.

The Young and the Restless writers left the door wide open for Cane to potentially go down along with Colin Atkinson (Tristan Rogers).

Speaking of Colin, there was talk about a new lead recently. It feels like we’re inching closer to Colin’s capture and the return of Devon’s fortune – or what’s left of it! Who knows how much dough Colin’s burned through by now?

Regardless, this isn’t really about the money anymore. Devon just wants the people responsible to pay, and that may include Cane.

Lily suggested that if Cane was guilty, maybe he could work out a deal with Michael Baldwin (Christian LeBlanc). She suffered through a prison sentence and doesn’t want Cane to end up there.

However, Devon argued that no mercy would be shown. He talks a good game, but would Devon really follow through on that? Y&R viewers may find out soon enough!

The Young and the Restless spoilers say Devon will face a terrible decision in the coming weeks. It’ll be one that he finds tough to make. Deciding Cane’s fate would certainly fit the bill. If it comes out that Cane’s guilty, Devon may have to determine whether he’ll advocate for a deal or push for that prison sentence he promised.

If Cane were single and childless, Devon would happily have him locked up. It’s tricky because of Lily, Mattie Ashby (Lexie Stevenson), Charlie Ashby (Noah Alexander Gerry) and Sam Ashby.

The twins definitely suffered while Lily was behind bars. Will they have to suffer through their dad’s imprisonment, too? Will Devon want little Sam to lose his daddy?

This decision won’t be entirely in Devon’s hands, but his opinion will carry a lot of weight since he’s the victim. It’s looking more and more like Cane may be guilty, so Devon’s upcoming choice could involve how things turn out for him. Lily, Mattie, Charlie and Sam will all be waiting to see what’s next.