The Young and the Restless Spoilers: Donny Boaz Signs 3-Year Contract With Y&R – Chance Chancellor To Put Down Roots In GC 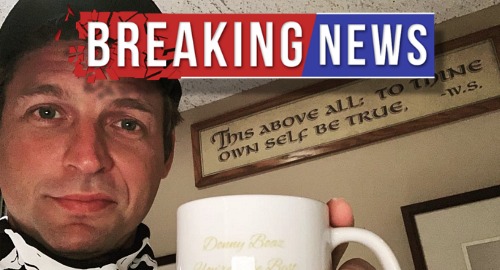 The Young and the Restless spoilers has some great news to pass along about a popular Y&R star. Donny Boaz, who portrays Chance Chancellor on the CBS soap, recently shared that he will be sticking around on the show, as he’s signed a three-year contract with the sudser.

That’s great news for Chance fans and for Y&R fans in general, and it suggests that Chance will indeed be putting down roots in Genoa City.

Donny made the revelation about his contract on a Zoom interview with Chuck Steelman, during which he discussed filming on Y&R during quarantine among other things.

Ahead of the interview, Donny posted an announcement about it on his Instagram feed along with the hashtags #YR and #ilovemyjob. That’s good, since Donny will be sticking around Y&R for a while!

As Y&R viewers know, Chance has been in talks with Paul Williams (Doug Davidson) about becoming a detective with the GCPD. Of course, Chance’s background is in law enforcement, so this would be a natural fit for him.

Chance has been working for the past several months as a security consultant in Genoa City, but that hasn’t seemed to be that lucrative. And besides, Chance seems best suited for police work, anyway.

Of course, if Chance does make it into the GCPD, then that means that he’ll likely be working alongside fellow detective Rey Rosales (Jordi Vilasuso). Chance and Rey could make a great team, once Rey gets back onto the force full-time.

Y&R viewers will remember that Rey stepped back from his duties to help Sharon Newman (Sharon Case) deal with her intense cancer battle.

But back to Chance, since his portrayer is slated to be around for the next three years, it’s likely that we’ll see things develop further between Chance and Abby Newman (Melissa Ordway).

During the week of September 28, Chance and Abby will have a conversation during which Chance mentions the future and specifically his desire to finally settle down and have a family.

That will kind of come out of the blue for Abby, but we suspect that Chance and Abby will probably soon start to evaluate exactly where their relationship is headed.

Sure, they started out as a fun thing, but they’ve become much more like a relationship in recent months, and it seems that they’re headed somewhere. Chance mentioned wanting to put down roots, and it looks like that will soon be the case.

Of course, Chance’s job with the GCPD could soon be in jeopardy, since the story about Adam Newman (Mark Grossman) that Billy Abbott (Jason Thompson) has been working on will soon go live on Chancellor Communications platforms.

That story will apparently focus heavily on Adam’s killing of AJ Montalvo when he was a boy, but it may also feature details or speculation about what went down in Vegas with Adam and Chance.

As Y&R viewers know, Adam ended up killing a man in Vegas who was about to kill Chance.

Thinking that the authorities wouldn’t understand, Chance and Adam covered up the crime and didn’t report it, and that’s probably going to come back to bite Chance at some point, or at least it will take some major finagling to keep it out of the public eye.

At any rate, Chance is going to be a big part of the Genoa City drama for the foreseeable future. Are you glad that Chance is going to be sticking around? Stay tuned to the CBS soap and be sure to keep CDL at the ready so you don’t miss any of the latest Young and the Restless spoilers and news. We’ve got you covered!

Looking forward to my interview with @chucksteelman tomorrow. I’ve known this gentlemen a very, very long time. Excited to catch up with him. I’ll make sure to post our interview once it’s available. #yr #ilovemyjob