The Young and the Restless Spoilers: Eric Braeden Sends Love to Fans During Coronavirus Crisis – Looks Forward to Filming Again 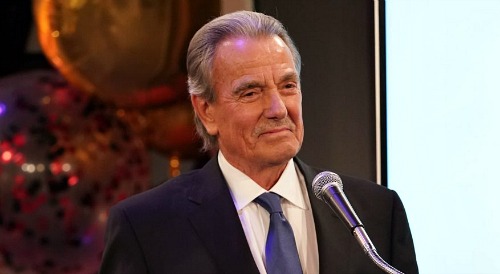 The Young and the Restless (Y&R) spoilers reveal that one CBS soap star is speaking out about the COVID-19 aka the coronavirus crisis and what’s ahead for the show. Y&R fans know Eric Braeden as the great Victor Newman in Genoa City. Victor is a force to be reckoned with and the same can be said for his portrayer! Braeden is the kind of guy who doesn’t hold back on social media most of the time.

Nevertheless, Braeden did choose to hold back at least somewhat recently. He didn’t go into the details of his opinions on COVID-19 and how it’s been handled, although he admitted his followers probably knew where he stood.

Braeden did, however, focus on rising above anger and offering gratitude to all the loyal fans out there. He also touched on his hopes for when Y&R will resume production.

“I shall abstain from making comments about this mess we are in!” Braeden said on Twitter. “Most of you know my stance! Tonight I shall not engage! It’s all too enraging! Thankful for all your support for the show! Hopefully we‘ll start up again sooner than is predicted ! Love you all!”

The Young and the Restless cast and crew are temporarily stuck at home until coronavirus concerns die down. Y&R officially suspended production for two weeks starting Tuesday, March 17, but a mere two weeks away was obviously wishful thinking.

It’s clear that this shutdown will last longer, but Braeden’s still staying positive about whenever he’ll ultimately be able to head back to work with his costars.

It’s nice of Braeden to send out some love to Young and the Restless viewers, who certainly want the cast and crew to stay safe during this COVID-19 crisis. Of course, Y&R fans are still curious about what the show’s plans are should they run out of new episodes.

It sounds like we’ll eventually see some classic Y&R weddings and other episodes of historical importance. For now, new episodes will continue to air, and we’ll hang in there as loyal fans. Braeden appreciates the support of all the faithful viewers, so stay tuned.

As for what’s ahead in Genoa City, The Young and the Restless spoilers say some shockers and shakeups are brewing. Adam Newman (Mark Grossman) will push Victor too far and face some serious backlash as a result.

We’ll keep you posted as other Y&R news and updates become available. It looks like Adam and Victor’s war will spiral out of control! Don’t miss all CDL’s hot Young and the Restless spoilers, updates and news posts.

I shall abstain from making comments about this mess we are in! Most of you know my stance! Tonight I shall not engage! It’s all too enraging! Thankful for all your support for the show! Hopefully we
‘ll start up again sooner than is predicted ! Love you all!💪💪💪