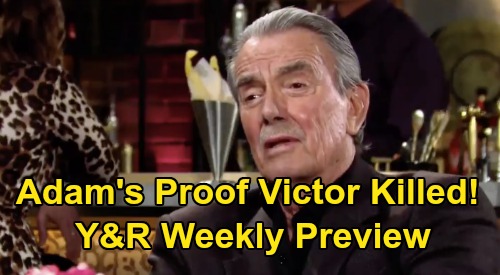 The Young and the Restless (Y&R) spoilers preview for the week of March 30-April 3 teases that things will get complicated for several Genoa City residents. First, Nick Newman (Joshua Morrow) and Phyllis Summers (Michelle Stafford) will find it increasingly difficult to keep doing this dance of theirs. There’s a real spark that’s once again growing into a raging flame.

Phyllis and Nick understand that their reunions typically end in heartache. It seems like sorrow’s inevitable when a “Phick” reboot happens, but they can never fight their feelings. Phyllis and Nick will enjoy more hot hookups and flirty banter, but there’s something deeper to pursue if they’re willing. They just have to decide if they want to speed it up or stop it right here.

The Young and the Restless spoilers say Nick and Phyllis will decide to start dating again, but their reunion certainly won’t be celebrated. Once Nikki Newman (Melody Thomas Scott) gets updates, she’ll blast Nick over his choice in women.

Nikki will wonder how Nick could even consider getting back together with Phyllis. This will be a full-blown nightmare for Nikki, but Nick will only care about his own happiness. Right now, Phyllis indeed makes Nick happy, so we’ll see how long their blissful bubble lasts!

Other Young and the Restless spoilers state that a tense meeting will get underway. During a faceoff at Society, Adam will deliver evidence collected by Alyssa Montalvo (Maria DiDomenico). Despite Victor Newman’s (Eric Braeden) doubts, Adam will present him with the dirty confidential details.

“Proof that my father killed a man in Kansas…all I gotta do is say the word and you’re gonna go to prison,” Adam says in Y&R’s weekly promo. Naturally, Victor will wonder what Adam intends to do with this newfound evidence. Does Adam really plan to send Victor to the slammer?

Adam’s obviously playing a very dangerous game – and he’s just getting started! Once Adam has Victor’s attention, he’ll lay out his terms and expect Victor to honor them. Adam will view this as the ultimate power play. Y&R spoilers say Adam will want Victor to see that he’s more like him than any of his other children.

However, one ruthless move deserves another. It won’t be long until Victor strikes back and hits Adam where it hurts. Adam will face some terrible news down the road, so stay tuned to watch his world blow up. CDL will have other scorching Young and the Restless spoilers, updates and news to pass along as this hot plot explodes.