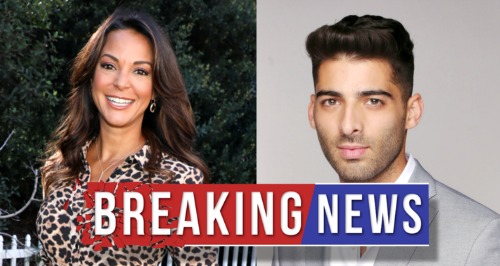 The Young and the Restless spoilers has some great news to pass on about some exciting returns to the show. Eva LaRue and Jason Canela will be reprising their roles as Celeste Rosales and Arturo Rosales later this month.

As Y&R viewers know, Sharon Newman (Sharon Case) and Rey Rosales’ (Jordi Vilasuso) wedding is coming up on New Year’s Eve, and that means that Rey’s mama Celeste and brother Arturo will be returning for the nuptials.

Unfortunately, it appears that Mia Rosales (Noemi Gonzalez) won’t be joining Celeste and Arturo, as she’ll likely be home with the baby that she and Arturo had earlier this year. It will be great to see both Celeste and Arturo, and you never know what kind of drama will follow them as they make their way back to Genoa City.

Many Y&R viewers were at one time hopeful that Jack Abbott (Peter Bergman) and Celeste would become a couple, but that just wasn’t meant to be.

Celeste ended up rekindling things with her ex-husband Adrian Rosales (Jay Montalvo), at least for a while. Jack and Celeste never really got off the ground, and one wonders whether they’ll run into each other this time around in Genoa City.

And then there’s Arturo, who’s Abby Newman’s (Melissa Ordway) ex. Now that Abby is happily married to Chance Chancellor (Justin Gaston), there could be some conflict if Abby and Arturo bump into each other – or maybe everything is sufficiently behind them and they can be on civil terms.

It might get interesting if Chance and Arturo meet!

Of course, the whole “Shey” wedding might not be without drama. The wedding day is quickly approaching, but Rey’s investigation into the attempted murder of Adam Newman (Mark Grossman) is heating up, too.

The Young and the Restless spoilers say that depending on how things shake out in the case, Rey could wind up in danger in the days leading up to the wedding – or at least he’ll be engrossed in the case and will need to step back to focus on his big day.

Hopefully, the wedding will go off without a hitch, but Rosales weddings tend to have some drama.

Y&R viewers will remember how Adrian showed up at Lola Rosales (Sasha Calle) and Kyle Abbott’s (Michael Mealor) wedding and caused problems before the wedding went down. One wonders what might happen this time!

At any rate, it will be a delight to see the Rosales family members together again. Are you looking forward to seeing Celeste and Arturo back in Genoa City?

Stay tuned to the CBS soap and don’t forget to check CDL as often as you can for all your Young and the Restless spoilers, updates, and news. We’ve got you covered!