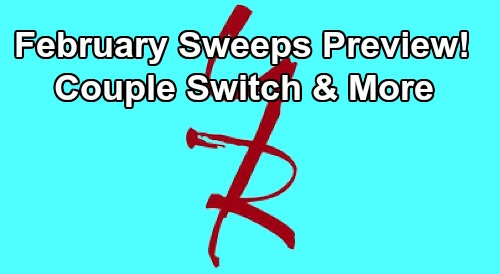 The Young and the Restless (Y&R) spoilers tease that some wild moments are ahead in Genoa City. February sweeps will deliver some scandals and shockers, so we’ve got a hot preview of all the action. Here’s what you can expect in GC over the next few weeks.

For starters, Sharon Newman (Sharon Case) will tackle her cancer battle head on. She’ll try to remain strong and optimistic, but she’ll naturally have times when she needs support.

It’ll be tough for Rey Rosales (Jordi Vilasuso) to know just how much support to offer. He realizes Sharon values her independence, so he’ll try to navigate this tricky territory as best as he can.

Nick Newman (Joshua Morrow) will also support and fret over Sharon, but he’ll have another ex to lean on. Y&R fans can expect Nick and Phyllis Summers (Michelle Stafford) to strengthen their connection. They’ll come together over Sharon’s crisis and enjoy some flirting along the way.

Nick will also have another Adam Newman (Mark Grossman) mess to contend with. He’ll get caught up in a family war, which will pertain to business this time.

Noah Newman (Robert Adamson) is set to return home soon, so could he get mixed up in all the Dark Horse drama? It seems likely, so that may bring some interesting Newman friction.

As for Adam and Chelsea Lawson (Melissa Claire Egan), they’ll stand tall against their haters. Chelsea and Adam won’t let any doubters get in their way, but what about Adam’s Vegas troubles? It’ll be interesting to see how those affect his relationship with Chelsea moving forward.

“Chance” Chancellor (Donny Boaz) has those same Vegas problems, but he’ll do his best to focus on Abby Newman (Melissa Ordway). Although Abby will deal with a new stumbling block, she’ll learn a lot about Chance’s level of devotion. It could help Abby decide if this is something that’s meant to last.

Other Young and the Restless spoilers say Billy Abbott (Jason Thompson) will take full advantage of his newfound freedom. Victoria Newman (Amelia Heinle) won’t approve since there are children involved. She’ll be worried about how Billy’s new lifestyle affect their kids, so that’ll add to Billy’s frustration.

Jill Abbott (Jess Walton) will have a project she hopes Billy can help her out with, but she’ll have an ulterior motive. She’ll actually want to keep Billy away from Amanda Sinclair (Mishael Morgan).

As for Amanda, her past will come back to bite her in the form of Ripley Turner (Christian Keyes). Amanda’s abusive former fiancé will bring some danger following his debut, so Billy will get caught up in that.

As Amanda and Billy figure out their true feelings for each other, the Abbott family will face a crisis. The Young and the Restless spoilers say all the Abbotts will deal with that crisis in a different way. It could lead to some infighting in the weeks ahead.

Nikki Newman’s (Melody Thomas Scott) hard work will pay off at the upcoming Newman anniversary gala, so expect some big returns and surprises. This will be quite an event to celebrate Victor Newman as well as his portrayer, Eric Braeden.

As for Paul Williams (Doug Davidson), he’ll investigate a serious crime that’ll affect many key players across the canvas.

There’s also the matter of untrustworthy Tanner and whatever tricks he might have up his sleeve.

However, Sharon’s cancer remains the secret that could bolster “Teriah’s” bond again. The countdown is on for when that secret will come out, and it’s sure to change the game in terms of Tessa’s priorities.

Over with Devon Hamilton (Bryton James) and Elena Dawson (Brytni Sarpy), they’ll find surprising common ground with Amanda. They’ll see Amanda in a new light – most likely due to Ripley’s appearance in town and the revelations that result.

Kyle Abbott (Michael Mealor) and Lola Abbott’s (Sasha Calle) marriage will also be in jeopardy thanks to a scandalous secret reveal. Summer Newman (Hunter King) and Theo Vanderway (Tyler Johnson) will be eager to get the love interests they want, but strategy will be key. Y&R buzz suggests a potential couple switch could be in store.