BY Heather Hughes on February 13, 2020 | Comments: one comment
Related : Soap Opera, Spoiler, Television, The Young and the Restless 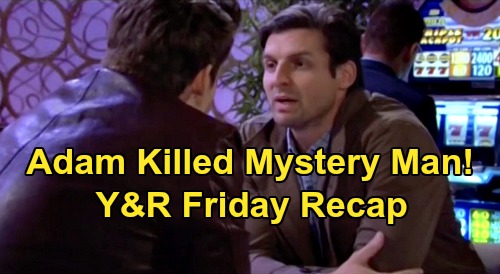 The Young and the Restless (Y&R) spoilers recap for Friday, February 14, teases that Phyllis Summers (Michelle Stafford) will arrive at Nick Newman’s (Joshua Morrow) place. He’ll be taken aback since he thought she was headed to Vegas. Nick will seem suspicious, but he’ll eventually shift gears and talk to Phyllis about Summer Newman (Hunter King).

As Y&R fans might expect, Nick will remain concerned about Summer’s reunion with Kyle Abbott (Michael Mealor). He’ll jokingly ask if they can stage an intervention or hire some deprogrammers to wipe Kyle from Summer’s brain.

Phyllis will admit Summer’s stubborn, so they’ll just have to wait on her to ask for help.

Talk will turn to Faith Newman (Alyvia Alyn Lind) next. Nick will be worried about Faith, who’s scared she’s going to lose Sharon Newman (Sharon Case). He’ll point out that Faith is smart and won’t let him gloss over anything.

Faith wants the unvarnished truth, but this is tough for Nick to navigate. Phyllis will give him a pep talk and get him laughing as they chat.

Other Young and the Restless spoilers say Chance Chancellor (Donny Boaz) will sit down at Adam Newman’s (Mark Grossman) table in Vegas. They’ll argue about whether Chance should be included in this meeting, which will give a waitress an opportunity to plant a listening device. Once the task is completed, she’ll text Phyllis to let her know they’re all set.

Next, Riza Thomas (Tina Casciani) will meet with Adam and Chance about the mystery woman. This lady doesn’t buy that her husband’s in witness protection anymore.

Riza will note that the woman’s hung up on the money she thinks her hubby stashed before he disappeared. She’ll warn that the woman will stop at nothing to find it.

At the Grand Phoenix, Phyllis will hear this conversation through the planted bug. Adam will insist on transferring enough money to make this problem go away; he’d pay double if it meant staying out of prison.

Chance will note that he’s got connections and won’t let Adam land behind bars. He’ll assure Adam that what happened was an accident. Adam just reacted when Chance was in danger and did what he had to do.

The implication is clear from the conversation: Adam killed the mystery woman’s husband in self-defense while saving Chance – Chance agrees it was an accident.

Unfortunately, Adam won’t think anyone else will see it like that – especially not the people Chance worked for. Back with Phyllis, she’ll be quite satisfied with her juicy ammo.

As for Adam, he’ll make it clear that this is his problem now. Adam will maintain that he’ll do whatever it takes to make it go away for good. Y&R spoilers say Phyllis will cause big trouble for Adam thanks to the updates she received, so she just might be his biggest threat.

In the meantime, Sharon will enjoy some sweet moments with Rey Rosales (Jordi Vilasuso) at Crimson Lights – although she’ll think he’s hovering a bit. Once Nick shows up, Sharon will head home and leave the guys to talk.

Nick and Rey will discuss “Kola’s” split and “Skyle’s” reunion news. Rey will think Summer’s victim of Kyle’s manipulation, too.

After the conversation shifts to Sharon, Nick will point out that Rey may need support as well. He’ll offer to lend an ear if Rey could ever use one. Once Rey exits, Nick will bump into Phyllis and thank her for the talk they had earlier. It put Nick on the right track again.

At the cottage, Rey will find Sharon looking ill and shaky. He’ll encourage her to focus and take deep breaths. Sharon will admit she got tired and was battling some stomach issues, but she’ll start to feel better. She’ll assure Rey and herself that she can do this.

Summer will talk about wanting a forever kind of love with Kyle since she’s loved him forever.

Kyle and Summer will talk about the delicate situation with Lola Abbott (Sasha Calle). They’ll also address their dads’ concerns about this quick reunion. Summer will feel confident that Kyle won’t hurt her again. She’s never been more certain of anything, so they’ll lean in for another kiss as Jack appears.

The Young and the Restless spoilers say Jack won’t be pleased to see Kyle ignored his advice. He’ll try to reason with his son again, but Kyle will insist he wants to live his life in the most truthful way he can.

Jack will warn Kyle that the rest of the world’s going to doubt and judge. They’re going to use Kyle’s past against him as evidence that he can’t be trusted.

Jack will just want both Kyle and Summer to learn from their mistakes. He’ll hope they can handle this the right way when it comes to Lola. The Young and the Restless spoilers say plenty of hot drama’s brewing, so be sure to stop by CDL often for updates and news.