The Young and the Restless Spoilers: Victoria Health Emergency, Out As CEO After Ripley Attack – Nick Takes Over Newman Throne 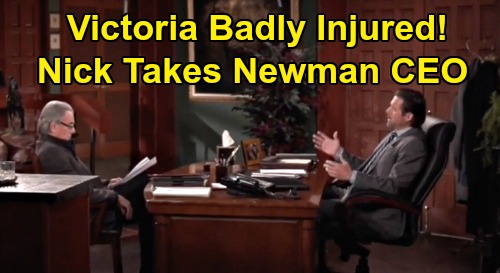 The Young and the Restless (Y&R) spoilers tease that Nick Newman (Joshua Morrow) will soon have a good reason to rejoin the corporate world. Y&R fans know Nick’s been focusing on other areas of his life lately. After ditching his city councilman run, Nick threw all his time and energy into New Hope. He truly wants to make a difference in the lives of those in need.

Of course, Sharon Newman’s (Sharon Case) cancer diagnosis was a tough blow for her loved ones. Nick’s schedule hasn’t been too crammed since he just concentrates on charity work. It’s allowed Nick to support Sharon so far and be a stellar dad to Faith Newman (Alyvia Alyn Lind), who’s living in Genoa City again.

Nick is content with the way things are and isn’t looking to get back in the corporate game. However, a major family crisis may force Nick to take the Newman throne!

The Young and the Restless spoilers say Victoria Newman (Amelia Heinle) will be hospitalized with serious injuries. A blooper reel already pointed to the shocker, but now reliable Y&R insiders back it up.

Ripley Turner (Christian Keyes) will be the reason for Victoria’s suffering, so Victor Newman (Eric Braeden) will undoubtedly see to it that the menace is brought to justice. Naturally, Victor will blame Billy Abbott (Jason Thompson) as well.

Victoria certainly won’t be in any kind of shape to run Newman Enterprises, and Abby Newman (Melissa Ordway) has her own businesses to take care of. Adam Newman (Mark Grossman) is also busy with plans to revive Dark Horse, so he won’t be interested.

As for Victor, he’s retired and may decide to keep it that way for the most part. Nick’s looking like the best option here when it comes to a full-time temporary replacement.

Braeden recently gave an interview to Celebrity Page TV, which included some footage of the revamped Crimson Lights set. There was also a little snippet of Braeden preparing for a scene with Morrow – one where Nick’s in a suit and sitting in the CEO chair.

It appears Nick will step up for Victoria while she’s out of commission, which lines up with some February sweeps updates, too.