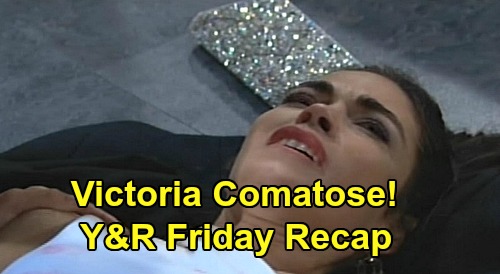 The Young and the Restless (Y&R) spoilers recap for Friday, February 21, teases that Ripley Turner (Christian Keyes) will bump into Amanda Sinclair (Mishael Morgan) as he’s making his getaway. He’ll be shocked when his ex is perfectly fine and standing in front of him. Amanda will demand to know why he’s there, but Ripley will choose to bolt instead of answering questions.

In the gala’s art gallery, Billy Abbott (Jason Thompson) will frantically call for help. As Victoria Newman (Amelia Heinle) bleeds from her stab wound, Billy will insist that someone has to dial 911. Paul Williams (Doug Davidson) will run in along with Christine Williams (Lauralee Bell).

Once Summer Newman (Hunter King) and Kyle Abbott (Michael Mealor) rush over, Kyle will be sent to find Nate Hastings (Sean Dominic). Y&R spoilers say Nate will fear that the knife may have punctured Victoria’s lung.

Soon after, Billy will land in a tight spot. Paul will contend that Billy should get a lawyer, but Billy will try to explain after Victor Newman (Eric Braeden) appears with Nikki Newman (Melody Thomas Scott) and Nick Newman (Joshua Morrow). When Victor tries to hold Billy at fault, Billy will insist he wouldn’t do this. It wasn’t him!

Amanda will back Billy up once she returns; she’ll explain the situation with Ripley and argue that he did this to Victoria. It was a case of mistaken identity. As Victoria’s rushed to the hospital, Nate will offer Amanda a warning. He won’t think it’s a good idea for Amanda to be alone tonight.

Rey Rosales (Jordi Vilasuso) will grill Amanda about her latest interaction with Ripley. Amanda will insist that once Ripley saw her, he realized his mistake. Rey will promise to put an officer outside Amanda’s hotel suite. He’ll also comfort Amanda a bit and make it clear that she’s not to blame.

Billy will think he should be free to go now that Rey and Paul have a suspect as well as a motive. He’ll want to head to the hospital and be there for Victoria. As for Abby Newman (Melissa Ordway), she’ll push Chance Chancellor (Donny Boaz) to track down Ripley and make him pay for what he did to her sister.

At Memorial, Nate will bark orders and try to get Victoria stabilized. The Newmans will gather in the waiting room and anticipate updates, which will come a little later. Nate will bring the family up to speed on Victoria’s liver and lung injuries. She’ll need surgery right away, but Victor will have faith in Nate to save Victoria’s life.

Once Paul shows up, Victor will rant about Billy being just as responsible as Ripley. After Paul takes off, Billy will arrive and face Victor’s fury. Victor will snarl about his daughter being close to death, but Nick will try to settle him down. Nikki and Adam Newman (Mark Grossman) will think it’s best if Billy leaves, but he’ll insist Victoria is the mother of his children.

Nevertheless, Billy will ultimately be escorted out by Chelsea Lawson (Melissa Claire Egan). Back with Amanda, Phyllis Summers (Michelle Stafford) will make sure she’s safely in her suite. She’ll warn Amanda to lock the door since she needs to keep her only friend alive. Amanda will still be trying to wrap her head around the night’s events. She’ll be shocked that Ripley tried to kill her.

Phyllis will see how rattled Amanda is, so she’ll embrace her and promise she’s not to blame. Down in the lounge, Chelsea will urge Billy to steer clear of the hospital. She won’t want Billy doing anything crazy. Amanda will still be a nervous wreck as she cries upstairs, but Billy will arrive to check on her. After Billy identifies himself, Amanda will let him in and they’ll commiserate over feeling responsible.

At the hospital again, Nick will be grateful when Phyllis comes and extends her support. As for Adam, he’ll share a sweet moment with Victor. Adam won’t know what to say, but Victor won’t think there’s really anything to say at a time like this. They’ll agree that family is all that matters right now.

Thankfully, The Young and the Restless spoilers say Victoria will pull through her surgery. Nate will deliver that news before Elena Dawson (Brytni Sarpy) admits Victoria is in a medically induced coma. Now it’s just a waiting game. Nate will think all they can do is hope for the best.

At the cottage, Noah Newman (Robert Adamson) will talk to Sharon Newman (Sharon Case) about her chemo before talk turns to his own life. His photography career is going well and he’s met someone, although they’re taking things slow. Sharon will think Noah should head back to London, but he’ll put up a fight. He’ll want to stay in town for Sharon, but she’ll only allow him to stick around for her surgery.

After Rey calls, Sharon will let Noah and Faith Newman (Alyvia Alyn Lind) know that Aunt Victoria was stabbed. The Young and the Restless spoilers say this is sure to be another drama-filled episode, so don’t miss it. CDL will have all plenty of Y&R updates and news as other Young and the Restless info comes in.