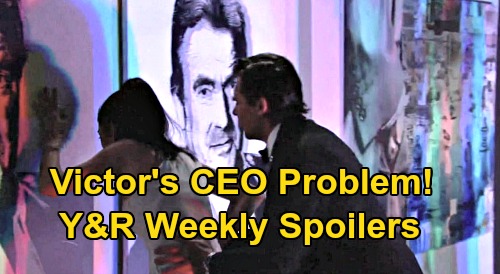 The Young and the Restless (Y&R) spoilers for the week of February 24-28 tease that we’ll see several Genoa City residents take charge. For starters, Victor Newman (Eric Braeden) will take the reins of a situation and drum up some support. He’ll probably want the family to band together in the aftermath of Victoria’s stabbing and hospitalization.

Of course, that means stepping up to take care of things at Newman Enterprises, too. Victoria will be recovering for a while and unable to function as CEO, but there’s still a business to run. Adam Newman (Mark Grossman) may offer to pitch in, which could lead to what Victor does next. The Young and the Restless spoilers say Victor will grill Adam and grow suspicious of his motives.

Adam hoped he’d reached a turning point with his father, but it doesn’t sound like Victor really trusts him at this point. Then again, Victor might question Adam’s motives for proposing to Chelsea Lawson (Melissa Claire Egan). He may wonder what Adam’s trying to prove by rushing into marriage with Chelsea again.

Whatever the case, Adam will stand his ground and Chelsea will prepare for the future. She might get the ball rolling on her return to the fashion business. Now that Chelsea’s out of the Grand Phoenix, she can get back to designing. Chloe Mitchell (Elizabeth Hendrickson) may end up joining Chelsea’s latest project eventually.

Other Young and the Restless spoilers say Phyllis Summers (Michelle Stafford) will mull over an enticing offer. She’ll be tempted to take it, but we’ll see if she actually goes for it.

As for Jill Abbott (Jess Walton), she’ll provide updates on an exciting business venture. Jill may view this as a true fresh start and a way to put Colin Atkinson (Tristan Rogers) behind her.

Speaking of Colin, his scam will finally go up in smoke. Devon Hamilton’s (Bryton James) fortune will be returned to him, so that’ll be one less thing for him to worry about.

Over with Jack Abbott (Peter Bergman), he’ll have some unsettling news to pass along. That could involve spreading the word about what happened to Victoria at the gala. That stabbing will definitely have GC buzzing!

Next, Nikki Newman (Melody Thomas Scott) will force Billy Abbott (Jason Thompson) to face the reality of a situation. She may have a problem with Billy hovering since he abandoned Victoria. Nikki will give him a warning, but Billy will want to stay close and be there for Victoria in her time of need.

Victoria will eventually awaken and seek answers about her condition. Y&R spoilers say Victoria’s doctors will offer more information about her recovery time and what that process will look like.

Meanwhile, Sharon will regain control. She’ll feel like she’s losing her grip – perhaps as her loved ones once again get too pushy about support. Sharon will work to balance her independence with leaning on her team when she needs them.

Mariah Copeland (Camryn Grimes) will be there for Sharon, but she’ll also reach out to Tessa Porter (Cait Fairbanks) and cause some relationship drama. After Tanner Watts (Chase Coleman) answers Tessa’s phone, he’ll assure Mariah that Tessa will call back once she’s out of the shower. Tessa will indeed call back via video chat, but Mariah will be more concerned about shirtless Tanner behind her.

After Mariah demands to know if Tessa and Tanner are sleeping together, it’ll spark conflict. Tessa will think this accusation is coming out of nowhere. She’s been busy singing and crocheting a scarf for Mariah, not having wild hookups with her ex. Tessa will disconnect and leave this tension without resolution for now.

Finally, Summer Newman (Hunter King) and Kyle Abbott (Michael Mealor) just won’t be able to contain themselves at the office. They’re enjoying their newfound happiness, so it looks like they’ll get hot and heavy at Jabot. Kyle and Summer are bound to face obstacles soon, but they’ll savor this bliss while they can!