The Young and the Restless Spoilers: Friday, February 21 – Bleeding Victoria Rushed to Hospital – Victor Wants Ripley and Billy to Pay 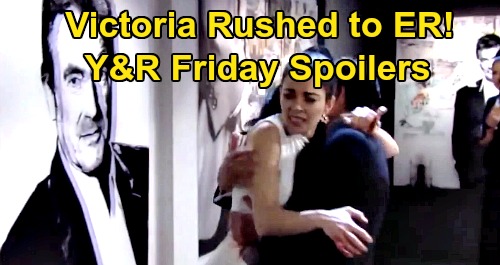 The Young and the Restless (Y&R) spoilers for Friday, February 21, tease that Victoria Newman (Amelia Heinle) will be rushed to the hospital following her nightmare at the gala. In Thursday’s Y&R episode, a case of mistaken identity gets Victoria stabbed. Ripley Turner (Christian Keyes) confuses Victoria for Amanda Sinclair (Mishael Morgan) due to the dark lighting and their similar gowns.

On Friday, Billy Abbott (Jason Thompson) will remain in shock over the horror show in front of him. Wounded Victoria will continue to bleed as paramedics are called to the scene. Paul Williams (Doug Davidson) has been celebrating Victor Newman (Eric Braeden) and his great success, so he’ll be on hand to investigate this stunning new case.

Ripley’s the reason Victoria’s in this life-threatening situation. His purpose as a Y&R baddie has been served, so someone will catch up with Ripley before he disappears. Even if Ripley manages to make a break for it, he probably won’t get very far.

Of course, the Newman clan will be focused on Victoria and making sure she has the best possible medical care. Elena Dawson (Brytni Sarpy) is at the gala, so she’ll probably tend to Victoria until the paramedics can get there.

The Young and the Restless spoilers say Victoria will eventually arrive at Memorial, where doctors can better assess her injuries and see if any vital organs were damaged.

As for Billy, he’ll be deeply troubled over this startling turn of events. The same goes for Victor, who’ll hold Billy just as responsible as Ripley. In the hospital waiting room, Victor and Nikki Newman (Melody Thomas Scott) will nervously await updates on Victoria’s condition.

Paul will take their statements and try to figure out exactly how this bombshell came about. Victor will make it clear that he wants Billy to pay as well, but Ripley’s the one who plunged the knife.

Although Billy acts like a jerk sometimes, that’s really the only thing he’s guilty of. The Young and the Restless spoilers say Billy will ultimately sit by Victoria’s bedside and hope for some good news.

It looks like another thrilling episode’s on the way. Y&R fans will want to check back for all the latest updates and news. Visit CDL regularly for the hottest Young and the Restless spoilers and jaw-dropping twist info.