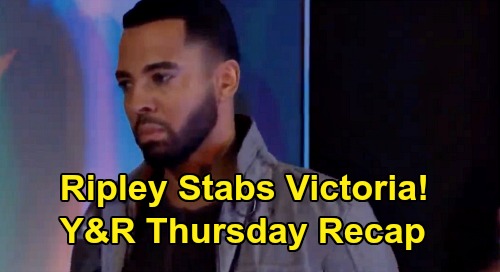 The Young and the Restless (Y&R) spoilers recap for Thursday, February 20, teases that the gala will wrap up with a horrific shocker, but we should also talk about what comes first. Victor Newman (Eric Braeden) will appreciate the car replica he receives from Victoria Newman (Amelia Heinle) and Nick Newman (Joshua Morrow). Nearby, Adam Newman (Mark Grossman) will witness warm moment.

Over with Noah Newman (Robert Adamson), he’ll get updates on Summer Newman’s (Hunter King) decision to get back together with Kyle Abbott (Michael Mealor). Summer’s happiness will be what matters most to Noah.

Across the room, Sharon Newman (Sharon Case) will weigh in on the Skyle reunion. Rey Rosales (Jordi Vilasuso) and Jack Abbott (Peter Bergman) still won’t think approve, but Sharon won’t think Summer and Kyle should be robbed of happiness. Phyllis will surprise Jack by backing Sharon up on that. She’ll reflect on the difficulty of finding true love and how it can be gone in a heartbeat.

At the Grand Phoenix, Billy Abbott (Jason Thompson) will talk to Amanda Sinclair (Mishael Morgan) about Victor’s big night. He’ll think it’s unfair for Victor to be celebrated for living on his own terms; that’s all Billy wants to do, too. After Amanda seems eager to make her exit, Billy will assume she’s avoiding him. He’ll wonder if maybe everyone’s right about him being a ticking time bomb.

Later, Billy will don a tuxedo and decide to crash the gala. Amanda will try to advise against it, but Billy will refuse to listen. After Billy heads out, Amanda will decide to follow him – unaware that Ripley Turner (Christian Keyes) is watching her.

Back at the gala, Jack will catch up with Jill Abbott (Jess Walton) while Christine Williams (Lauralee Bell) speaks with Paul Williams (Doug Davidson). Christine and Paul will talk about letting Victor have his glory. In the bar area, Sharon will confess her breast cancer crisis to Nikki Newman (Melody Thomas Scott). Nikki will feel confident that Sharon can beat this since she got past their many battles.

Other Young and the Restless spoilers say Abby will corner Phyllis and rage about her latest scheme. She’ll insist there’s “no way in hell” she’s selling her shares to Phyllis. Chelsea will join in the drama while Chance talks to Adam about the recording. Phyllis can use that tape as a weapon for as long as she wants, so Chance will offer a warning.

Adam will acknowledge that Phyllis has won for now, but he’ll think their luck will turn around eventually. When Adam hints that maybe Abby should give up her part of the Grand Phoenix, Chance won’t approve of that plan. Over with Sharon again, she’ll tell Rey about her chat with Nikki before Noah promises to take Sharon back to her place.

After Nick teases Phyllis about the fights she’s been starting, they’ll get close in the shadows of the gallery. Nick will admit he feels like Phyllis can see into his soul. Similarly, Phyllis will feel like Nick knows who she really is. They’ll ultimately lean in for a kiss while Adam shares his own romantic moment with Chelsea.

Y&R spoilers say Chelsea will think Phyllis did her a favor by forcing her out. She’ll be hopeful about reviving her design career at some point. Everything will just feel so right, so Adam will get down on one knee and pop the question. Chelsea will agree to marry Adam; she’ll admit part of her has always still been Adam’s wife.

Before Phyllis heads home, she’ll cross paths with Victor. They’ll comment on how they didn’t ruin the night for each other, so at least there’s that! Victor will join Nikki soon after to reflect on Sharon’s cancer diagnosis. It’s a reminder not to take things for granted.

Other Young and the Restless spoilers say Victoria will speak with Jill briefly. Despite Jill’s insistence that Billy is a good man, Victoria won’t be eager to discuss him. Later, Billy will arrive followed by Amanda. She’ll think Billy’s drunk and needs to calm down, but he’ll insist on making a scene in the shadowy gallery.

Amanda will wind up gripping Billy’s face and encouraging him to leave. A menacing Ripley will watch and turn his back while Amanda leaves. Victoria will suddenly appear as the lights dim – and her dress will look incredibly similar to Amanda’s. Thanks to the mix-up, Ripley will stab Victoria in her side before walking away.

That’ll leave Billy to notice an unsteady Victoria and wonder if she’s all right. Billy will gape at the blood before Victoria falls forward. He’ll hold Victoria up as she grimaces in pain.

It sounds like an action-packed show with lots of twists and turns! As other Y&R updates and news emerge, be sure to pop over to CDL for some great Young and the Restless spoilers.