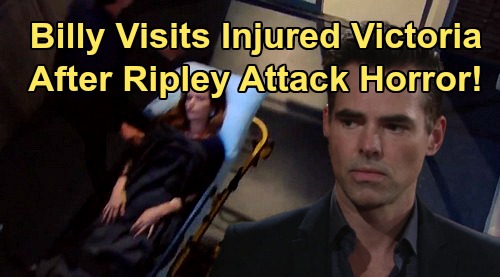 The Young and the Restless (Y&R) spoilers tease that Amanda Sinclair’s (Mishael Morgan) decision will come back to haunt her. Y&R fans know Amanda decided to take her power back by demanding that Ripley Turner (Christian Keyes) get out of her life for good. She sent him packing, but she really should’ve let the authorities deal with him properly. Ripley’s a stalker and clearly isn’t going to stay away.

Based on a leaked video and some insider updates, it looks like Victoria will land in Ripley’s path because of Amanda. No matter how this plays out, Victoria should wind up severely injured in a hospital bed. The Young and the Restless spoilers say this is all set to go down after the upcoming Newman Enterprises gala.

Billy Abbott (Jason Thompson) has been pretty out of control lately – although he doesn’t see the problem. He just wants to live a life without judgment and restrictions. Of course, sometimes restrictions can be a good thing. Billy’s about to find out that actions always have consequences, even if they’re unintended.

In other words, Billy’s connection to Amanda will put Victoria in harm’s way. Ripley is obviously the one to really blame here, but Billy’s sure to battle regrets. It sounds like Ripley will go after Victoria somehow due to his assumption that Billy and Amanda are an item.

Things may get out of hand and go further than Ripley intends. After all, Amanda claims that he never got physical with her. Regardless, the point is Billy will inevitably feel responsible as he sits by Victoria’s hospital bed. He knew Ripley was bad news, but he never could’ve predicted something like this.

The Young and the Restless spoilers hint that Billy will kiss Victoria’s head tenderly and wish he could undo this damage. He may even wish he could go back and reunite their family, but Victoria’s established that she’s done.

Billy may pray for a miracle, but it actually sounds like Victoria awaken soon after this violent incident and begin her recovery. Unfortunately, Victoria may not be as forgiving as Billy might’ve hoped! Y&R spoilers also reveal that Victor will be absolutely furious and start issuing ultimatums.

“Villy” seems pretty kaput after how much Billy hurt Victoria. Between that and how all this danger could affect their children, Billy and Victoria’s reunion chances aren’t looking good right now.

The Young and the Restless spoilers say the excitement’s about to rev up in Genoa City, so stay tuned. More updates and news should roll in on this Y&R storyline soon, so check back here at CDL often.