BY Heather Hughes on February 14, 2020 | Comments: one comment
Related : Soap Opera, Spoiler, Television, The Young and the Restless 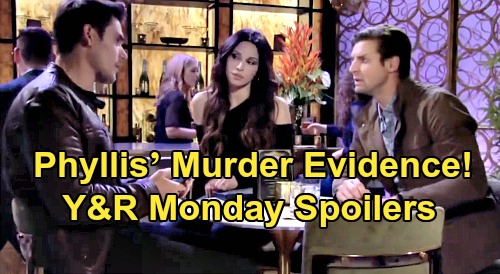 The Young and the Restless (Y&R) spoilers for Monday, February 17, tease that Devon Hamilton (Bryton James) will get a new lead. He’ll realize this could be a crucial clue in his mission to get back everything he’s lost.

Y&R fans know Colin Atkinson (Tristan Rogers) duped Devon into signing over his fortune to Cane Ashby (Daniel Goddard). Colin ultimately stole all the money and took off, which started a massive search for both Colin and the money.

There’s no word on whether Devon’s lead will include Colin, but it’ll definitely tie in with his fortune – wherever it may be. The Young and the Restless spoilers say Devon will be part of the chase on Monday. He’ll get some vital updates and hope his stolen pot of gold’s waiting at the end of all this.

With any luck, Devon will at least get a step closer to reclaiming his money and restoring what Katherine Chancellor (Jeanne Cooper) wanted. Honoring Katherine’s wishes is important to Devon – and so is having enough wealth accomplish all his charitable goals.

Devon’s always going to be a generous guy, but he can obviously be more generous when he’s got billions to throw around.

While Devon pursues this lead and hopes for the best, Y&R spoilers say Phyllis Summers (Michelle Stafford) will work on a project of her own – a vengeful one.

Thanks to a helpful waitress in Vegas, Phyllis will have the dirt she needs on Monday. She’ll be able to hold a deadly secret over Adam Newman’s (Mark Grossman) head, but it’ll probably be Chelsea Lawson (Melissa Claire Egan) she approaches first.

Phyllis has been looking for a way to gain more control at the Grand Phoenix. She may have backed off that angle somewhat, but it was always in the back of her mind. Now an opportunity has dropped right in her lap. She’ll blackmail Chelsea with what she knows about Adam – which is that he killed a woman’s husband out in Vegas.

Of course, the circumstances are far more complicated than that. Adam was really just protecting Chance Chancellor (Donny Boaz) when the whole thing got out of hand. He didn’t want to kill the guy, so it was an accident and completely justified based on the danger Chance was in.

Naturally, Phyllis will just focus on the part about Adam being the reason a man’s dead! She’ll use scare tactics to force Chelsea into giving up her hotel shares, so Phyllis will win for now.

It won’t be long until both Adam and Chance realize Phyllis knows their Vegas news. They’ll kick themselves for letting Phyllis gain the upper hand, but there won’t be much they can do accept keep her under control.